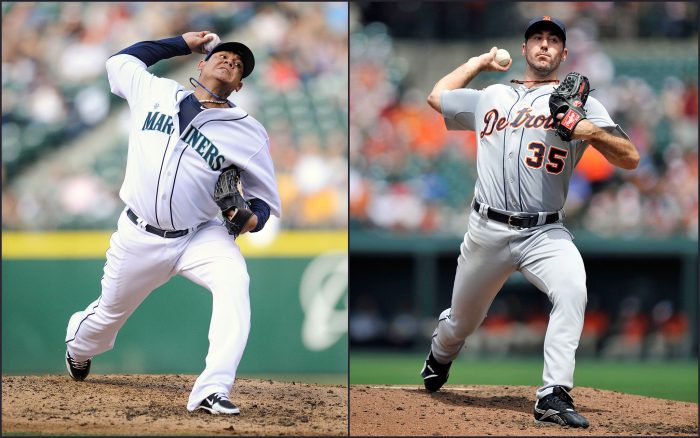 Whether it’s catching every red light during the morning commute, missing that important phone call by one ring, or simply being stuck behind a horde of indecisive patrons at Starbucks; timing is everything.

The same applies for baseball fans hoping to see Felix Hernandez of the Seattle Mariners and Detroit Tigers ace Justin Verlander square off against one another at Safeco Field this week.

Verlander takes the mound tomorrow, but Hernandez won’t see action until he faces the Houston Astros in three days.

Granted, neither pitcher is what they used to be. King Felix’s peripherals have been trending downward for three seasons and he’s spent significant time on the disabled list for a second consecutive year.

Similarly, Verlander had a down 2014 before missing 10-plus starts the following season. The 34-year-old rebounded nicely to be a Cy Young award runner-up last year. Unfortunately, his current campaign looks like a 2014 repeat.

Still, seeing two great pitchers go head-to-head is worth the price of admission for me. Even if they’re not what they once were.

It shouldn’t be a surprise the pitchers are showing signs of regression at this stage of their respective careers,

Both are on the wrong side of 30 and CC Sabathia of the New York Yankees is the only active pitcher with more innings logged since the duo debuted during the summer of 2005.

For nearly a decade, Felix and Verlander were the standard used to measure other starters, but that’s changed. Names such as Kershaw, Scherzer, and Sale now dominate the landscape.

Whenever the inevitable occurs and the older star relinquishes center stage to the next generation, conversations regarding legacy aren’t far behind.

With Felix and Verlander, it’s likely both will be viewed through the same prism when their contributions are considered. To see what I mean, here’s a side-by-side of the comparison of the duo’s career stat lines.

There is one distinct difference between these players, which could potentially distort the view of some fans — opportunity.

Verlander was fortunate to play for a successful organization, while Felix languished with a club mired in a 15-year postseason drought.

Since 2005, the Tigers have five postseason appearances, including two trips to the World Series. Conversely, the Mariners last played meaningful October baseball when Felix was a 15-year-old.

Playing with a winning team for the majority of his career helps explain Verlander’s lead in wins (177) over Felix (156). Each performed at relatively the same high level, but one benefited from playing for a winner.

This is proof positive pitcher wins are a reflection of a team’s success and not a useful metric to gauge the pitching performance.

That brings me to the burning question certain to occupy the minds fans in Detroit and Seattle for the foreseeable future.

Are Verlander and Felix Hall of Famers?

The short answer is not yet.

To get a feel for the pair’s current Hall of Fame prospects, consider how they compare to notable pitchers not yet selected for induction.

Considering Mike Mussina and Curt Schilling are falling short of the necessary 75-percent needed for selection, Felix and Verlander could be facing an uphill journey to Cooperstown.

I’m not saying there’s no chance. It’d be foolish to underestimate fiercely competitive performers with such illustrious track records.

That said, this year’s stat lines aren’t exactly generating confidence for what lays ahead.

Verlander is surrendering more walks and hits and striking out fewer hitters than in years past.

On the other hand, the right-hander hasn’t seen an appreciable change in pitch velocity and he’s just one year removed from finishing five votes shy of his second Cy Young award.

Before going down with shoulder bursitis in late April, Felix was giving up significantly fewer free passes than last season, but hitters were teeing off on the 31-year-old.

With that said, the 13-year veteran entered this season with a new approach, which may explain his early season struggles.

Rather than living on the edges of the strike zone in search of the swing and miss as he’s done throughout his career, Hernandez now focuses on attacking the zone with the goal of pitching to contact.

Perhaps, Felix hasn’t fully adjusted to his new strategy and he’ll go on to master it as the season progresses. If that’s the case, he can remain productive; even if he’s not his former dominating self.

Is it possible we’re simply witnessing the beginning of the end for these two great mound warriors? Sure, but it’s premature to write off either player.

Regardless of what lays ahead for Verlander and Felix, both have already distinguished themselves as the best in their era.

Hopefully, we’ll get to see them lock horns a few more times before they finally hang up their cleats.

With any luck, timing will be on our side the next time the Mariners and Tigers meet.