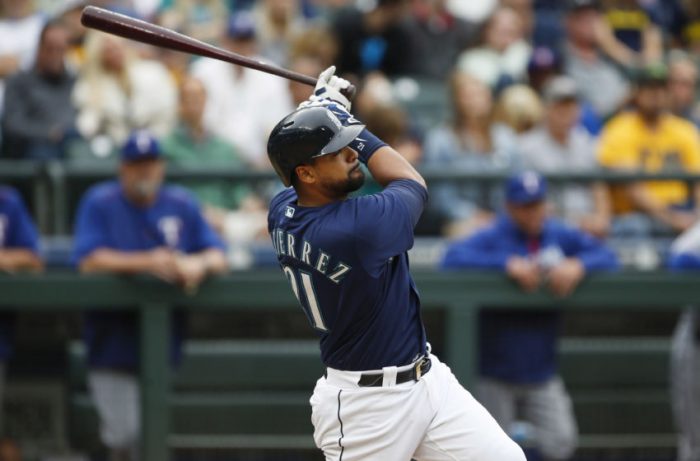 Yesterday, Franklin Gutierrez signed a one-year contract with the Los Angeles Dodgers. The fact that the 33-year-old won’t be playing for the Seattle Mariners in 2017 shouldn’t come as a surprise. Past his prime, Gutierrez no longer fit into Seattle’s plans.

Still, there was an air of sadness in my house.

You see, “Guti” is my wife’s second favorite Mariner ever — only Edgar Martinez holds higher stature with her. That’s saying a lot since considering she’s lifelong fan.

I’m not at liberty to say how long that’s been, but I can report one of her earliest memories of seeing the team in person involved the 1986 home opener. To this day, she reminds Dad that they left the game early to beat the traffic and missed Jim Presley hitting a walk-off grand slam.

Considering my wife’s passion for the Mariners and Guti, I decided to write about his Seattle career that coincidentally started the same year I moved to the Pacific Northwest — 2009.

I’m sure a segment of Seattle fans doesn’t view Gutierrez as highly as my better half. They’re more inclined to remember him for lost playing time due to illness and injury. However, there was much more to Guti than just being a favorite of my favorite person.

Gutierrez arrived in Seattle as a key piece in the first trade made by general manager Jack Zduriencik. The newly hired “Jack Z” pulled off an aggressive three-team deal with the Cleveland Indians and New York Mets in December 2008. Here’s a look at all of the players involved.

As an Indian, Gutierrez played 284 games after debuting with the club in 2005. During his last season in Cleveland, he slashed just .248/.307/.383 with just eight home runs in 440 plate appearances — the most of his short career.

During his first year with the Mariners, Guti posted career bests at the plate — .283/.339/.425 with 18 round trippers. Team management was so pleased with his performance they gave him a four-year/$20.25 million extension with a $7.5 million club option for 2014.

In retrospect, this deal was easily the best of the Zduriencik era. Unfortunately, for Mariners fans, Jack Z would be the club’s GM for six more offseasons and he’d never pulled off a trade nearly as good as this one.

While his offensive production of the then-26-year-old was impressive, Zduriencik acquired Guti for his elite-level defense — he did not disappoint.

Given the moniker “Death to Flying Things” by the late, great Mariners broadcaster Dave Niehaus in 2009, Gutierrez’s unmatched defensive acumen was on display in the following video when he’s bailed out starting pitcher Jason Vargas — who came over from the Mets in that 2008 mega-deal.

Some are dismissive of defensive metrics, but they help further solidify Guti’s defensive greatness beyond the eyeball test. Between 2009 and 2012, he ranked first among center fielders with 2000-plus innings in defensive runs saved (DRS) and ultimate zone rating (UZR).

How good was Gutierrez’s range during that period? His 49.3 Range Runs (RngR) were best in the majors and almost better than the next three players combined — Chris Young (18.3), Michael Bourn (16.9), and former Mariner Austin Jackson (14.9).

Unfortunately, if you’re going to talk Guti, you have to get to his health troubles at some point. In 2011, he missed 41 games with gastrointestinal problems, which foreshadowed problems he still deals with. Later that season, he’d miss another 23 due to an oblique strain.

In 2012, his misfortune continued. He started the season on the disabled list due to a pectoral strain, which kept him out of action for nearly three months. Just two weeks after returning to the club, Gutierrez was struck in the head during by an errant pick-off attempt and missed another 50 games due to a concussion. The following season, Guti would miss over 100 games with hamstring issues.

Eventually, a diagnosis of irritable bowel syndrome (IBS) and ankylosing spondylitis helped explain why Guti couldn’t stay on the field — he was battling chronic illnesses.

Although the Mariners didn’t pick up that 2014 club option, they brought him back on a lesser $1 million deal with performance incentives. Unfortunately, Guti didn’t play that year opting to sit out 2014 and focus on his health.

When Gutierrez decided to give baseball another go in 2015, Zduriencik brought him back to the organization on a minor league deal. The right-handed hitter started the season with Class-AAA Tacoma and put up an impressive .317/.402/.500 slash with seven homers during a 48-game run with the Rainiers.

In late June, he joined the Mariners getting a hit in four plate appearances against the Kansas City Royals. Guti started and played the entire game. But, he was no longer patrolling center field. In fact, he’d never play another inning at his old position. Now, he was a corner outfielder or designated hitter.

The club also managed his appearances so Guti could remain healthy. He wasn’t specifically a platoon player, but 59-percent of his 189 plate appearances came against left-handed pitching. By August, Jack Z would lose his job and — despite his health troubles — Gutierrez outlasted the executive who brought him to the Emerald City in 2008.

Some observers weren’t sure whether new general manager Jerry Dipoto would bring back the second-longest tenured Mariner behind Felix Hernandez. After all, Dipoto wanted to improve his new club’s outfield defense and athleticism — two skills stolen from Guti by age and illness.

Still, Dipoto knew he couldn’t completely change Seattle’s roster during his first offseason with the club. So, he signed Guti to a one-year deal. The player formerly known as “Death to Flying Things” had become a below-average defender, but he still could crush left-handed pitching.

Yes, Gutierrez’s overall .246/.329/.452 slash last season was league-average. But, he was highly productive against southpaws. You might be surprised how well he did compared to the club’s best right-handed hitter — Nelson Cruz.

Guti was remarkably close to Cruz in plate appearances, walks, and on-base percentage. Certainly, “Boomstick” was a more complete hitter — he played every day. But, Gutierrez had found a niche since coming back from his prolonged absence.

Sadly — at least for my wife — Guti’s time as a Mariner has ended. While he fit into Dipoto’s plans last year, the additions of Danny Valencia and Mitch Haniger made his return highly unlikely.

Valencia is more versatile than Gutierrez is and provides similar right-handed power. While Haniger is unproven, he’s younger and a superb defender capable of playing all three outfield positions. That hasn’t been the case for Guti since 2013.

Now, Gutierrez will wear Dodger blue. How he fits into their plans will be determined later. But, he’s likely to serve as a veteran platoon capable of providing pop off the bench.

No, fans won’t remember Franklin Gutierrez as an all-time great Mariner for his offense or availability. But, he should be honored for persevering in the face of adversity and being the best defensive center fielder in the club’s 40-year history.

That may sound like heresy to fans favoring Ken Griffey Jr. or Mike Cameron. Yes, Junior was a superb defender deserving of Hall of Fame induction and Cammy was an elite glove too. But, neither were named “Death to Flying Things” by Dave.

Mariners GM Jerry Dipoto is in a "win now" mode and it shows when you look at his roster. Go!