Arkins: Is Edgar Martinez A Hall Of Famer? 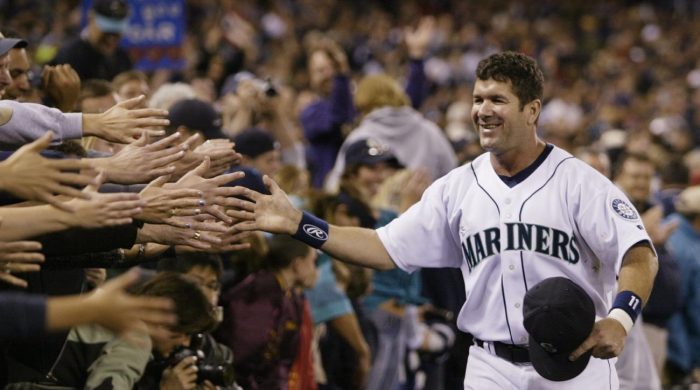 As much as Seattle Mariner fans may not want to hear it, Edgar Martinez isn’t a sure bet for induction into the National Baseball Hall of Fame. He just isn’t.

That’s not a criticism of Martinez, who spent his entire career in Seattle. It’s reality.

You see, baseball is a sport with firm ties to its past, more than most others. Consequently, an unconventional career — like Martinez’s — is a challenge for a traditionalist to evaluate or, in some cases, appreciate.

For nearly a century, determining Hall of Fame worthiness was relatively straightforward for fans and those responsible for selecting players for enshrinement. Then, baseball did something unfathomable in the minds of purists — evolve.

While many fans consider all of these ideas good ones, another segment of baseball lovers do not. From time-to-time, I’ll jokingly scoff at pitchers hitting on Twitter only to receive quick pushback from folks equally opposing the designated hitter.

That’s the dilemma facing Martinez and other non-traditional stars. Incremental modifications to the game have made it increasingly difficult to build a consensus on what a Hall of Fame career looks like in the twenty-first century.

Considering the challenges facing Edgar Martinez proponents, I decided to assess his Hall worthiness by using a multi-pronged approach. Included are a discussion about several criticisms directed at his 18-year career and performance comparisons to recent and past Hall of Famer inductees.

For decades, a position player registering 3,000 hits or 500 home runs was a virtual certainty to enter the Hall of Fame. Martinez didn’t approach either — 2,247 hits and 309 home runs.

Still, not reaching these prestigious marks shouldn’t diminish the credentials of Martinez or any other Cooperstown hopeful. I suspect some fans would be surprised to learn the names of notable Hall of Famers who didn’t reach or exceed 3,000 hits or 500 home runs.

Every player on the preceding list was a selection of the Baseball Writers’ Association of America (BBWAA) with the exception of the late Ron Santo, elected by the Veterans committee in 2012. The career numbers of this distinguished cast demonstrates Martinez — or any other candidate — shouldn’t face exclusion solely for not compiling a certain level of hits or home runs.

It’s worth noting several of the players listed above were catchers and it’s understood donning the tools of ignorance affects the offensive production of backstops. Furthermore, several players with reputations for strong glove work — Brooks Robinson, Ozzie Smith, and Barry Larkin — didn’t reach the aforementioned milestones. Their defensive acumen certainly factored into their selection.

Discussions about defensive play segues nicely into the next criticism of Martinez’s resume. His glove work — of lack thereof — may be the biggest hurdle the 54-year-old’s candidacy faces in the collective mindset of the old guard.

Didn’t Play In The Field

As noted earlier, a cross-section of the baseball community still rails against the designated hitter; a position that’s been part of Major League Baseball for over four decades. These folks aren’t likely to view Martinez as a Hall of Famer, ever.

The hardcore anti-DH crowd dismiss the five-time Silver Slugger winner’s offensive prowess because he didn’t — or couldn’t — play defense. They point to the fact Martinez played just 560 games in the field.

Advanced defensive metrics didn’t exist during Martinez’s playing days, but the eyeball test and his fielding percentage (.946) suggest he wasn’t a good defender at third base. On the other hand, Martinez’s performed better (.987) during limited action at first base.

Am I suggesting Martinez would’ve been a gold glove defender at first base?

No, but his offensive production would likely have offset any defensive shortcomings, as it did for other offensive-first players moved to first base during their respective Hall of Fame careers.

Here are several examples of prolific hitters, who eventually transitioned to first base after uninspiring defense at another position. Martinez’s numbers are included for comparison purposes.

Yes, I’m using a limited stat — fielding percentage — as a comparative metric. That should please old-school fans. Perhaps, it’ll help sway some to acknowledge Martinez’s defense wasn’t so bad he doesn’t merit consideration for a plaque in Cooperstown.

Willie McCovey, Willie Stargell, and Orlando Cepeda all began their big league career in the outfield, but moved to first base as their respective careers progressed. Ironically, McCovey has the same fielding percentage at first base as Martinez, although his sample size was much larger than the former Mariner’s.

Interestingly, Tony Perez split his fielding time between first and third base just like Martinez. The Hall of Famer debuted as a first baseman, but his first five full seasons were at the hot corner where he registered the same fielding percentage as Martinez.

In reality, Martinez would’ve played first base if the designated hitter position didn’t exist. But, it did and the Mariners maximized his value and productivity by keeping him off the field.

Consider this. If the designated hitter position was available when Stargell, McCovey, Cepeda, and Perez were active, is it possible they would’ve played the position on a regular basis?

Would the quartet be less worthy of their Hall of Fame honor if they were designated hitters?

Despite the reservations of the traditionalists, the designated hitter and one-inning closer are essential components in baseball. Yet, only one of the two specialized roles has received Hall of Fame recognition.

Time obscures the fact some of the best relief pitchers in the history of the game began their career in a starting rotation. Now, they’re remembered more for their bullpen heroics.

Hall of Fame closer Goose Gossage actually earned an all-star selection as a starter in 1976, although he achieved true stardom after transitioning to a relief role. Dennis Eckersley spent 11 seasons as a solid starting pitcher until converted into a closer by the Oakland Athletics. His 12 years as a reliever propelled his career to paradigm shifting heights.

Perhaps the greatest closer of all and widely viewed as a certainty for the Hall — Mariano Rivera — didn’t stick as a starting pitcher. But, he rewrote the record book for the position.

With relievers already in the Hall, it’s inevitable designated hitters will join them. Even if the old guard resists.

No Ring, No Hall

The Mariners have reached the postseason just four times since beginning play in 1977 and Martinez was a member of all those teams. In fact, his time with Seattle was the most successful era in the franchise’s 40-year history. Still, there are whispers suggesting limited playoff exposure and his team’s lack of postseason success are detrimental to Martinez’s Hall of Fame chances.

It’s not a notion promulgated on a large scale in the baseball community. Rather, it generally stems from fans and talking heads in cities with far more successful organizations, such as New York and Boston. The goal; advance the Cooperstown credentials of former stars, such as Andy Pettitte or David Ortiz, by espousing their postseason heroics.

Nonetheless, the argument postseason success of a team — or player — should be a key factor in determining Cooperstown worthiness lacks merit. Some of the best to play the game never won a World Series ring.

So far, the focus has been on Martinez’s shortcoming; real or otherwise. Let’s turn the focus to what he accomplished during his long career.

Since Martinez retired in 2004, the BBWAA has selected 16 position players for the Hall of Fame. The list of names is an impressive roster of performers from the last quarter-century. With that in mind, comparing Martinez to contemporaries who’ve earned Cooperstown recognition might help shed light on seven-time all-star’s credentials.

For these comparisons, I focused on non-compiling stats — batting average, on-base percentage (OBP), slugging percentage, on base plus slugging percentage (OPS), and OPS+. If you’re not familiar with OPS+, it takes into consideration the era and ballparks a hitter played in. This will be particularly useful later when we compare Martinez to several greats from the past.

I sorted the following table using the Baseball Reference version of wins above replacement (WAR). This isn’t an endorsement of the metric as a benchmark for measuring players. However, it simplifies categorizing players from various eras or those who played different positions.

To assist with comparisons, I highlighted the previously mentioned metrics when players were better than Martinez. It didn’t take long.

Only Frank Thomas, Jeff Bagwell, Ken Griffey Jr, Mike Piazza, Wade Boggs, and Tony Gwynn topped Martinez in any category. Thomas and Bagwell were the only players besting the former Mariner more than once. The “Big Hurt” was a first ballot Hall of Famer, as were Griffey, Boggs, and Gwynn.

That brings up an important issue for Mariner fans to remember about their beloved Edgar. He wasn’t deserving of first ballot selection like former teammate Ken Griffey. But, the two-time batting champion’s production does compare very well to his peers.

Next, Hall of Famers from previous eras with a similar profile to Martinez.

Earlier, I compared the defensive prowess of Martinez to McCovey, Stargell, Cepeda, and Perez. The similarities carry over to their offensive proficiency. Again, I highlighted stats better than Martinez’s.

Both McCovey and Stargell had significantly more home runs. Yet, Martinez’s slugging percentage was greater than Stargell’s and the same as McCovey. Moreover, the trio registered the same OPS+ during their esteemed careers.

A comparison of OPS further demonstrates Martinez was a better overall offensive weapon than each player listed. He reached base far more often and provided similar or better slugging prowess.

Placing Martinez’s offensive stats side-by-side with the prolific sluggers listed on the preceding table elevates his stature and brings into focus the merits of his Cooperstown candidacy.

With that said, I decided to go a step further by comparing his career metrics to all Hall of Famers. To provide context, I included notable inductees ranked behind Martinez.

As you can see, Martinez stacks up well in most categories. I wonder how many of you realized he had a higher career batting average than George Brett — a hitter who once flirted with a .400 season.

In my estimation, the information I’ve shared demonstrates Edgar Martinez is a Hall of Famer. Nevertheless, his candidacy will continue to spur spirited debate among BBWAA members and the baseball community at large.

Unlike any other player before him, Martinez played the majority of his games as a designated hitter and didn’t reach the hitting milestones most closely associated with Hall of Famers. That’s hard to reconcile in the minds of some.

Still, Martinez stacks up well against peers and players from every era when compiling stats aren’t the basis of comparison. What’s more, the designated hitter has been a real position in baseball for over 44 years and isn’t likely to go away.

Fortunately, for Martinez and others from recent generations, a growing segment of Hall of Fame voters are embracing advanced metrics and looking at players through a different prism than some of their predecessors.

Will Martinez receive a plaque in Cooperstown during his final two years of eligibility? It’s hard to tell and depends largely on shifting opinions and evolving demographics within the BBWAA.

Even so, it’d be disappointing if a player as worthy as Martinez doesn’t receive the honor of Hall of Fame induction. Not just for his avid fans in the Emerald City, but for baseball as a whole.