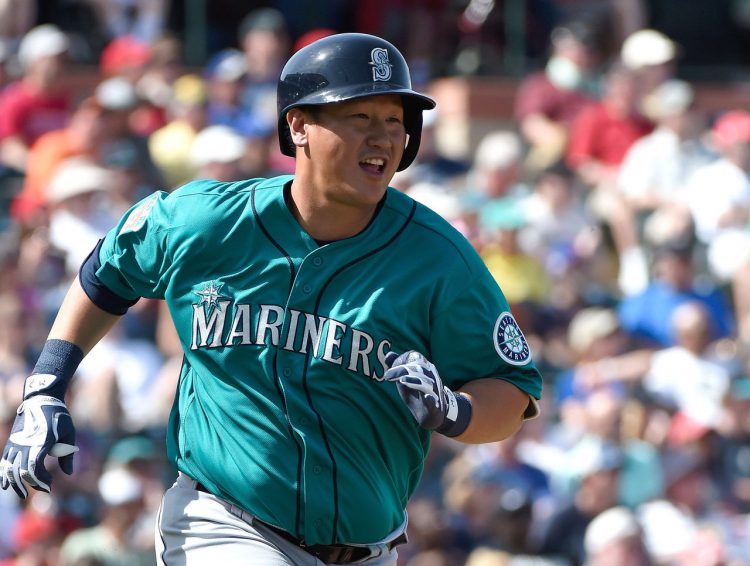 The Seattle Mariners spent much of the off season revitalizing a roster that lacked flexibility and in some cases, general athleticism. Given this, the arrival of Dae-Ho Lee was particularly intriguing. In part because the M’s went abroad to acquire a bat. Also, because while he was a premier hitter overseas, Lee didn’t fit the mould of this ‘new’ Mariners squad.

I have to admit that I was one of many who, in Spring Training, felt that adding a bat-only — not bat-first, bat-only — player to what had become a flexible roster could be counter productive. But at the same time, the roster flexibility created could have created the exact situation for a player like this to work. Earlier, it was thought that Jesus Montero would finally have a chance to see regular time in the majors, but that would not be the case.

We are now almost two months into Lee’s major league career and the Seattle Mariners can say that they have seen a return on their investment.

At the basic level, Lee’s .254/.293/.507 slash line entering Monday’s game isn’t particularly inspiring and the slugging percentage is fueled by six home runs. Looking at the bigger picture, his 118 wRC+ is an above average mark and places him in the company of Adrian Gonzalez and a rejuvenated Hanley Ramirez. However, the major caveat here is that Lee’s 75 plate appearances make up a third of the pair of All-Star’s season totals.

While a two-month sample can be indicative of what’s to come for a season, less than 100 plate appearances is hardly an adequate sample to draw conclusions from.

As mentioned, the long ball has been the key driver to Lee’s value early on. His 22.7 percent strikeout rate is around what was expected, though his 4.0 percent walk rate could come up a few points and reflect a better on-base percentage. The 33-year-old has managed to hit the ball to all fields but owns a nearly 11-percent whiff rate. His swinging through pitches regularly is likely a byproduct of his unfamiliarity with the league.

It’s common for a slugger to strikeout a lot and that tends to correlate to a high number of pitches swung at. Currently Lee is swinging at nearly half of the pitches he sees. I’d like to see that number decline by a few percentage points over the next month with Lee being a little more selective in finding pitches he can drive into the outfield and beyond.

Of the 18 hits Lee has picked up this year 12 have been singles. Home runs aside, he does not own an extra base hit on the year. There have been a handful of instances where Lee has hit a “long” single, as they are often described on broadcasts, which for most other players would actually be a double. I don’t want to knock the slugger for not owning a double on the year — and a triple would likely require a showing on a misplay reel — but it isn’t exactly a great anecdote.

There is not a single qualified hitter who has hit fewer than two doubles and only Dustin Ackley and James McCaan are without a double given a minimum of 70 plate appearances. Not to harp on this one fact, but when a player has a difficult time going first-to-third, being able to start at second can be a big deal. Not to mention the fact that doubles overall are more valuable than singles, but I didn’t need to tell you that.

One aspect of Lee’s game that I have been surprised at is how he’s taken to first base. Ignoring the old adage that anyone can play the position, the right-hander has proved to be reliable and up to this point is error-free. He hasn’t done anything spectacular, but being able to play tough hops and stretch for throws is a large portion of the gig.

With the reflexes of a mongoose and the agility of a panther, Dae-Ho Lee starts and finishes the 3-6-3 double play

When I saw Lee in Spring Training my general take away was that he  looked strong at the plate, but slow just about everywhere else. This wasn’t meant to serve as an indictment of Lee, but more so a confirmation of what the scouting reports and general opinions were saying. The power was likely going to be there, but much of the rest was going to be a question mark.

It’s interesting to note that Lee, the right-handed portion of a platoon, has actually posted a reverse platoon split so far this year. He has struck out more against right-handers, but owns a 132 wRC+ against them compared to a 110 wRC+ against lefties. Entering Monday’s game he had hit three homers against each side.

It’d be easy to say the M’s should get Lee some more at-bats against right-handers, but with Adam Lind starting to pick up the pace, that is difficult to do. Unless of course, Nelson Cruz starts the game in right field which opens up the designated hitter spot, but this should be done with caution and only periodically. With Leonys Martin on the disabled list there may be some opportunity to do this short-term.

The moral of Lee’s story entering June is that, if you’re going to throw a fastball over the plate, he’s going to crush it. As the league starts to write the book on the right-hander, it’ll be his job to make adjustments. This is where we’ll be able to get a better idea as to whether or not Lee can be a regular, perhaps everyday, player. There isn’t the significant platoon split that Lind features and he’s done well enough at first to escape the term ‘defensive liability’.

For a couple million bucks, it looks like the Mariners will at least have a positive gain on their investment. The next four months will tell us exactly how big of a gain that will be. Right now, things are trending in the right direction.