Arkins: Are The M’s Really Destined To Crash? 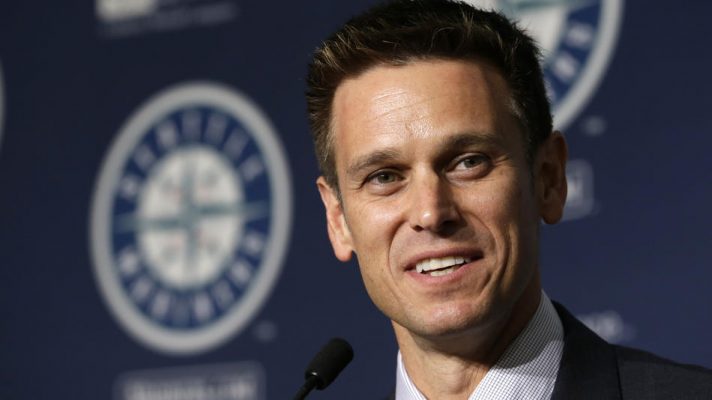 The MLB non-waiver trade deadline is fading in the rear-view mirror, but a segment of Seattle baseball fans remain frustrated by the relative inactivity of the hometown Mariners.

Despite the local and national perception Seattle is a club taking a win-now approach, general manager Jerry Dipoto pulled off just three deals in the weeks leading up to the July 31 deadline; none were considered major.

What prompted a highly respected columnist like Rosenthal to opine Seattle was facing an inevitable decline?

Most baseball observers believe a club with a low-ranked minor league system and anchored by three 30-something veterans showing signs of regression — Felix Hernandez, Robinson Cano, and Nelson Cruz — can’t produce sustainable success. Therefore, blowing up the roster is unavoidable.

Not surprisingly, Dipoto pushed back telling Bob Dutton of the Tacoma News Tribune, “We don’t think we’re getting ready to crash into the earth.”

So, which is it? Are the Mariners old and certain to collapse or is Dipoto right about his roster?

To help myself arrive at a conclusion, I compiled a potential 40-man roster for the 2019 Mariners. Seeing who’ll be available to the club in two years should help determine whether Seattle is actually getting ready to crash.

My roster is comprised of players currently in their organization. Included are major leaguers under team control for at least two more seasons and several prospects.

You’ll notice I didn’t identify 40 players. My intent is to present a potential foundation available to the Mariners, not predict the actual roster name-for-name.

The players listed below are segregated by their age as of July 1, 2019. When you break down the roster this way, the Mariners’ outlook doesn’t seem nearly as gloomy as the national narrative implies.

It’s quite possible five under-25 prospects on my list — starting pitcher Nick Neidert, outfielders Kyle Lewis, Braden Bishop, and Luis Liberato and first baseman Evan White — won’t be major league ready by the start of the 2019 season. Still, they have a realistic shot of being on Seattle’s 40-man roster.

Even without those youngsters, the Mariners project to have a solid core of players under age-30. Included in the group are current starting position players Jean Segura, Mitch Haniger, Mike Zunino, and Ben Gamel and closer Edwin Diaz.

While an influx of youth is incrementally joining Seattle’s roster, there will be several key contributors on the wrong side of 30. But, only one will be over age-35 — Cano. The next oldest Mariner will be Hernandez; he’ll only be age-33.

Suddenly, the roster doesn’t seem as old as intimated.

Having said that, the squad I’ve suggested will have deficiencies. Here’s how the starting position players shape up, assuming the club doesn’t trade anyone from the current stable and no one succumbs to injury or regression.

The most glaring holes facing the Mariners are first base and center field. During his first two years as general manager, Dipoto has chosen to go with short-term solutions at first base — Dae-Ho Lee, Adam Lind, and Danny Valencia.

Perhaps, the Mariners turn to prospect Daniel Vogelbach or continue acquiring placeholders until a more permanent solution appears via trade or the minor league system.

During his short professional career, White has impressed. He could develop into that long-term fix, but it’s very unlikely he’s ready by 2019.

Another name to consider at first base is Cano. To the chagrin of some fans, I suggested several years ago the all-star second baseman might eventually change positions. If such a move took place, the need for another starting player would shift to second base.

Dipoto may continue to staff center field with temps until the organization’s top prospect — Lewis — is ready. The 22-year-old currently projects to play the position, although that could change as he progresses through the Mariners’ system.

When Cruz’s contract expires after next season, Seattle will have to address designated hitter. The club could pursue retaining the Boomstick, find a specific replacement, or simply move away from having a player fill the position on a full-time basis.

The latter option seems the most realistic approach for a Dipoto team. Rotating players through designated hitter gives clubs more roster flexibility and provides an opportunity to keep banged up players in the lineup, while giving them a break from the field.

As you can see, there’s a decent level of stability among position players. Conversely, the pitching staff is far less certain. Here are the most likely internal candidates for the Mariners’ rotation with their 2019 age in parenthesis.

Depending on one’s outlook, it’s a positive or negative so many familiar names may comprise the starting staff two years from now.

James Paxton appears destined for stardom, but Opening Day starter Felix Hernandez has struggled with injury and inconsistency for two seasons. It’s hard to project what King Felix will be in 2019 — the final year of his contract.

The remaining pitchers in the mix for the 2019 rotation are either unproven or own an undistinguished major league resume. Perhaps, some will evolve into something more or a prospect such as Neidert will emerge on the scene. That’s a lot to hope for though.

Diaz may continue to anchor the back-end of the bullpen in two years, which bodes well for the Mariners. How many fans realize the club’s sophomore closer will only be 25-years-old in 2019?

Surrounding Diaz will be a youthful core of hard-throwing relievers — Dan Altavilla, James Pazos, Thyago Vieira — with veteran Nick Vincent being the “old man” at age-32.

Granted, some of the relievers listed above probably won’t be a Mariner in 2019. Reliever volatility is real, pitchers get hurt, and players such as Vincent and Tony Zych may become too expensive once they’re arbitration eligible.

Okay, back to my original query. Are the Mariners certain to collapse?

While it’s true Seattle is relying on aging stars to succeed this season, the club is getting good value from under-30 players Ben Gamel, Jean Segura, Mike Zunino, Guillermo Heredia, Ariel Miranda, and Paxton.

As long as Dipoto continues to build upon his young foundation and addresses the rotation, his organization won’t go into the nosedive many pundits are predicting.