Dipoto and his layers of depth 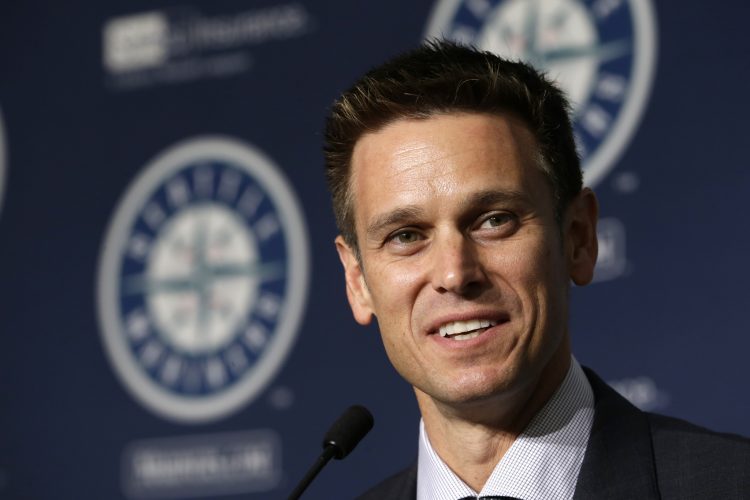 It’s early June and the Seattle Mariners are dealing with injuries. Every club faces the same challenge. It’s part of baseball. Sometimes, injuries are short-term. Other times, they have season-changing consequences.

So far, the Mariners’ injury losses haven’t changed the course of their season. That’s good news for a club with a realistic shot to remain competitive for the entire season and — possibly — earn their first postseason berth since 2001. This year is different in Seattle.

The notion that the Mariners could actually be different in 2016 — meaning competitive and relevant — has revived long-dormant optimism in the Pacific Northwest.  But, newfound hope can quickly turn into angst. Especially, when three Opening Day starters land on the DL at the same time.

Anxiety levels are bound to soar even higher when one of those three players is the team’s ace — Felix Hernandez. Although the calf injury suffered by “King Felix” appears to be relatively minor, uptight fans are concerned that not having their best pitcher available every fifth game puts the team at a huge disadvantage in the competitive American League. Makes sense.

To compound matters, shortstop Ketel Marte and center fielder Leonys Martin are the other two players to join Hernandez on the DL. Both have been catalysts to the Mariners offense and their replacements have inadequate. At least that’s what I’ve been reading on social media.

Seattle fans have a right to be impatient; fourteen seasons without a postseason appearance will do that to a fan base. But, are their concerns about the Mariners’ replacements well-founded?

Considering that general manager Jerry Dipoto made adding depth an offseason priority, a few short-term injuries shouldn’t derail the club. Otherwise, the Mariners aren’t actually ready to make a postseason run after all. Did the 48-year-old executive and his staff fail to build a sustainable roster?

Let’s find out by looking at Dipoto’s layers of depth at the three positions affected by the losses of Hernandez, Marte, and Martin. Perhaps, that will shed some light on the subject.

Rotation
Certainly, losing Hernandez hurts. The King has been an elite-level pitcher for seven seasons, although he hasn’t been the same this year. At times, he’s been closer to average than special. Still, losing the King frustrates and worries the masses. Why is that?

Simply put, King Felix has been the best player on this club for nearly a decade, opted to forego free agency to stay in Seattle, and fans want to see him pitch meaningful innings in October. Even if he’s not at the top of his game, fans prefer to see Felix pitching every fifth day. He’s better than the alternatives. Right?

The answer is “absolutely yes.” But, how much better depends on how the King’s replacement — James Paxton  — fares during his absence. Although the left-hander’s June 1 season debut in San Diego was a disaster for both he and the ball club, the jury remains out on what to expect from the 2010 fourth-round pick.

Last night, Paxton rebounded nicely with a very solid outing against the Cleveland Indians. Although the Mariners lost the game, the big southpaw flashed dominant stuff, registering 10 strikeouts and just one walk during six innings of work.

It’s a tad early to propose renaming the left field corner of Safeco Field the “King James Court.” But, Paxton’s performance was encouraging nonetheless. I must admit that the “Big K James” has a certain ring to it though.

Paxton still needs to prove that he can be consistent at the big league level. However, his performance against the Tribe and his last eight starts with Tacoma — 41.1 innings pitched, 43 strikeouts, and five walks — suggest that he’s capable of filling in for Felix on a short-term basis.

Assuming Paxton remains a solid performer, the club will have an appealing “problem” when their King returns — six major league ready starters for five slots, plus capable starter Mike Montgomery in the bullpen.

Prospect Insider founder Jason A. Churchill points out that a strong showing by Paxton during this audition provides Seattle with several options that could help manage the innings of Taijuan Walker and Nathan Karns and/or reinforce the bullpen.

All-in-all, the Mariners have a deeper rotation than most American League clubs and are better prepared to withstand the loss of a starter than many contenders. However, Dipoto could still opt to upgrade that deep rotation, if the struggles of Wade Miley and Walker were to carry over into July or Paxton regresses. Stay tuned.

Shortstop
When Marte sprained his thumb diving into second base on May 21, the Mariners immediately recalled Chris Taylor from Tacoma. Unfortunately, for the 25-year-old, his stay with the big league club was both notorious and brief.

In his first and only start before returning to the minors, the normally sure-handed Taylor committed two fielding errors in the same inning during a 5-0 loss to the Oakland Athletics. Clearly, those two errors prevented the Mariners from scoring any runs that night.

To replace Taylor, Seattle recalled Luis Sardinas; sent to Tacoma to get more at bats and diversify his position portfolio by getting more outfield experience.

Overall, Sardinas held down the fort until Marte’s return to the lineup last night. The 23-year-old provided solid defense and a .235/.257/.324 triple-slash. Although Sardinas’ performance wasn’t at a level commensurate to what fans have come to expect from Marte, it was good enough for a short period.

Optimally, it’d be nice to have a surplus of middle-infielders, like the Texas Rangers. But, that kind of depth is the result of finding and developing good players over the span of many years. The new front office in Seattle hasn’t even drafted a player, yet.

Center field
The replacement with the most complaints being lobbed in his direction is, without doubt, Nori Aoki. In the eleven games that he’s covered in center field since Martin went down, he’s been inconsistent at the plate. That’s not new though. His defense has fans griping about the 34-year-old.

It’s no surprise that Aoki can’t cover as much ground as Martin. You don’t need metrics to understand that. However, there’s an underlying issue exacerbated by the veteran’s lesser range. The loss of their center fielder further exposed the Mariners’ porous corner outfield defense, which ranked near the bottom of the AL before his injury.

Without Martin available to cover additional ground, more balls are falling into the outfield gaps between Aoki and corner outfielders such as Nelson Cruz, Seth Smith, Franklin Gutierrez, and Stefen Romero — all average to below-average defenders.

Center field depth is currently tenuous. Perhaps, the Mariners will look inward to minor leaguer Boog Powell for help, but Churchill recently noted that the 23-year-old isn’t ready to be an everyday major leaguer. That doesn’t mean that Powell won’t see action this year. He’s just not the optimum choice to improve the club’s roster. If he were, he’d already be in Seattle.

Finally
Considering the lack of organizational depth when he took over as the Mariners general manager last September, Dipoto and his staff have done an impressive job of putting together a competitive 25-man roster with key pieces sitting at Tacoma ready to be called upon, if needed.

As the trade deadline approaches, I expect that Dipoto will address the needs I’ve touched upon with the outfield and perhaps the rotation. The bullpen could be a likely target too.

I also expect that he’ll be on the lookout to add to his team’s depth. Unlike recent years, the new-look Mariners focus on the entire 40-man roster, not just the major league squad. That’s how you build and sustain a contender.

Yep, this year is certainly different in Seattle.