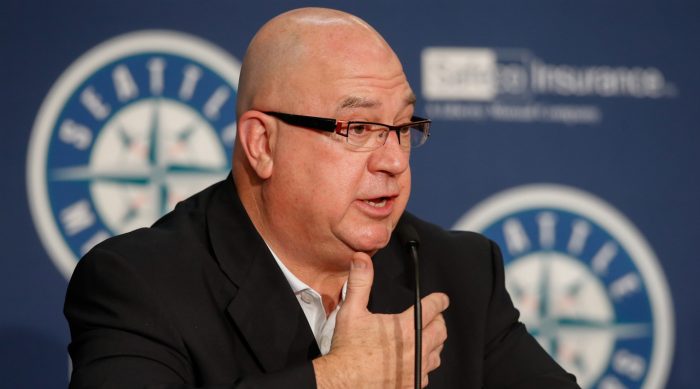 This story was originally published January 5, 2016.

It’s been just over four months since the Seattle Mariners parted ways with their former general manager – Jack Zduriencik. For many fans, the club waited too long and should have dismissed the baseball executive several years earlier.

That’s an understandable sentiment from the fan base of an organization that hasn’t reached the postseason in 14 years, which happens to be the longest current playoff drought in the majors.

A month later, the club hired Jerry Dipoto to take Zduriencik’s place and revitalize the organization. In just three months, the new general manager performed a major facelift on his team’s roster by making 10 trades and signing four major and six minor leaguers.

Overall, Seattle added 17 new players to their 40-man roster since the end of the 2015 season. On top of that, he re-signed free agent Mariners Hisashi Iwakuma and Franklin Gutierrez. Dipoto’s frenetic pace has been fueled by his desire to change the identity of the entire organization, while attempting to contend in 2016.

During the Zduriencik-era, noteworthy position player acquisitions were predominantly focused on acquiring sluggers, which normally came at the expense of the team’s defense – a key component to run prevention.

Conversely, the new front office has set out to field a team that takes advantage of spacious Safeco Field from an offensive and defensive standpoint. Dipoto’s position player transactions have been designed to add players with good on-base ability who aren’t defensive liabilities.

Dipoto’s aggressive attempt to reboot the Mariners roster could be viewed as an indictment of Zduriencik’s legacy by some, but I believe it’s unfair to characterize his seven-year stint in the Emerald City as a complete failure.

Yes, it’s true that he didn’t accomplish his ultimate goal of building a sustainable, successful ball club. But, to say that “Jack Z” didn’t have any positive impact on the Mariners would be incorrect. Assuming that there aren’t any significant changes made to the team between now and Opening Day, Zduriencik’s fingerprints will be all over the club’s 25-man roster.

If the Mariners were fortunate enough to reach the postseason in 2016, I’d expect that Dipoto would feel compelled to acknowledge his predecessor for leaving him with a solid foundation to build upon.

I understand that defending the former Mariners general manager won’t gain me friends in the Pacific Northwest or make me more popular on social media, assuming that I was ever popular. But, it’d be wrong to not acknowledge Zduriencik’s contributions to the organization that he led for seven years.

Don’t get me wrong – I thought that Seattle needed to make a change. After Geoff Baker of the Seattle Times chronicled the level of organizational dysfunction during Zduriencik’s watch, it became abundantly clear that club waited too long to make a move.

Despite the negative organizational climate revealed by Baker and the team’s poor showing on the field — only two winning season and three others with 90-plus losses — there’s a positive footnote to Zduriencik’s tenure. Specifically, a significant number of players acquired or retained during his time in Seattle are likely to have a positive impact on the 2016 Mariners.

Many of these players could make a difference for several more years. Take a look at the players who are most likely to earn — or at least compete for — a spot on the club’s Opening Day roster and you may agree with me. Let’s start with the most likely starting nine.

As you can see, five of the projected starting position players are holdovers from the Zduriencik’s tenure. At least four – Robinson Cano, Kyle Seager, Nelson Cruz, Ketel Marte – are likely to be with the team after next season.

Granted, Cruz may show signs of significant decline and Cano will be age-34 by 2017. But, Seager will be in his prime and Marte will only be 23-years-old after next season. Inheriting a core composed of these four position players — plus Seth Smith — had to influence Dipoto’s stated belief that the Mariners can compete in 2016.

Another component of the roster that had to boost Dipoto’s confidence is the cadre of starting pitchers he inherited. Depending on the outcome of the competition for the final two rotation spots, it’s possible that three of Dipoto’s starters could be Jack Z holdovers, plus Felix Hernandez who was signed as an amateur free agent during Pat Gillick’s tenure.

Assuming the team carries seven relievers, there will be four available bench spots. The following list isn’t all-inclusive and some new names are likely to be added to the fray between now and when players report to Peoria. But, I think I’ve captured the candidates who have the best chances of making the big league club. Several were acquired by the former front office.

Although the prevailing thought is that Ketel Marte – who broke onto the scene last August – is the clear-cut choice to play shortstop, Dipoto maintains that Taylor is in the mix for the starting shortstop job. Having said that, I expect that Marte will win the job.

Even if Taylor doesn’t earn the starting job, he definitely has a shot to stick as a backup infielder. Regardless of who wins the job, both Taylor and Marte are Zduriencik products.

Gutierrez — acquired from the Cleveland Indians in Zduriencik’s first major trade as Seattle’s general manager in 2009 — had an amazing bounce back season after missing significant playing time after being plagued with a barrage of injuries and health issues since 2011. Dipoto was impressed enough with the 32-year-old’s performance to re-sign “Guti” to a major league deal after the outfielder had filed for free agency.

I’m sure that the mere mention of Zunino will make some fans cringe. There’s no doubt the 24-year-old has been a disappointment who hasn’t lived up to the hype that surrounds a number-three overall draft choice. Plus, barring injury, he’ll probably spend the entire 2016 season at Class-AAA Tacoma. However, the new Mariners general manager has repeatedly praised the catcher’s potential, which leaves the impression that he views Zunino as a part of the team’s future.

The remaining segment of the roster is the bullpen, which was a major disappointment in 2015. Although the Mariners’ offense was terrible during the first half of last season, the relief corps turned out to be even worse after being a team strength in 2014.

As with the bench and rotation, I’ve listed the most likely candidates for spots. Anyone who’s been following the club knows that Dipoto will continue to add players to compete for spots in the pen.

Poor performance was the primary reason for the big turnover, although Dipoto dispatched several relievers during his recent trade frenzy. The only survivors from the previous regime are Charlie Furbush, Vidal Nuno, and Tony Zych. Everyone else is a Dipoto addition who’ll compete with the three holdovers to fill eight bullpen spots.

Speaking of Dipoto’s aggressive deal-making, we shouldn’t ignore how the new general manager used Zduriencik-era major leaguers to quickly flip his roster and transform the club’s roster. The players Dipoto received in return are indirectly tied to Zduriencik’s legacy.

Needless to say, most of these moves weren’t greeted with enthusiastic fan approval. The trade that received the most negative feedback was the acquisition of pitchers Wade Miley and Jonathan Aro, which led to the departure of pitchers Carson Smith and Roenis Elias to the Boston Red Sox. Both Smith and Elias are young players with a lot of upside and many years of club control remaining.

Another deal met with fan outrage was the trade of popular reliever Tom Wilhelmsen to the Texas Rangers along with outfielder James Jones and prospect Patrick Kivlehan in exchange for Leonys Martin and Anthony Bass.

Ironically, many of the fans who energetically complained about Dipoto dealing away Zduriencik players were happy to see the former general manager leave Seattle.

Trading away these players helped the Mariners pick up at least five players who are expected to contribute in 2016. That means that Dipoto couldn’t have pulled off those deals without Zduriencik’s indirect help.

Understandably, not everyone will agree with my last statement. After all, it was Dipoto who was willing to lean forward and make these unpopular deals.

Perhaps, Jack Z would have made one of these deals in one offseason, but not all three. That’s being generous since the Zduriencik regime appeared to be unable or unwilling to pivot away from their own players, even when they proved to be unproductive – refer to Dustin Ackley.

Jack Z may have acquired Miller, Smith, Elias, Wilhelmsen, and Kivlehan, but Dipoto was the general manager who was willing to assume the risk of dealing them away in order to improve the team.

As I said earlier, I believe that the Mariners made the right choice by moving past Zduriencik. Nevertheless, he did leave Dipoto with a strong core of players to build around, plus useful pieces to trade away.

In retrospect, player development and roster construction were two of the weakest elements in the Mariners’ strategy to build a winning organization under Zduriencik. Combine that with a poor organizational climate and you have a franchise that needed a new baseball voice.

Hopefully for Dipoto and the team’s followers, the 47-year-old executive will do a better job at building a sustainable contender than Zduriencik did. Right now, he’s in the honeymoon-mode with the fan base. But, that goodwill is certain to evaporate quickly, if the team gets off to another sluggish start. If he can’t affect change, he’ll eventually suffer the same fate as the recently dismissed general manager.

On the other hand, if Dipoto’s plan to compete in 2016 succeeds and the Mariners reach the postseason for the first time since 2001, he’ll deservedly receive the majority of the credit for resurrecting a franchise that’s better known for futility than playoff baseball. If that happens, I’m certain that he’ll give a deserved nod to his predecessor for laying the foundation that permitted him to revive the dormant franchise.

Hopefully, Mariner fans would do the same.