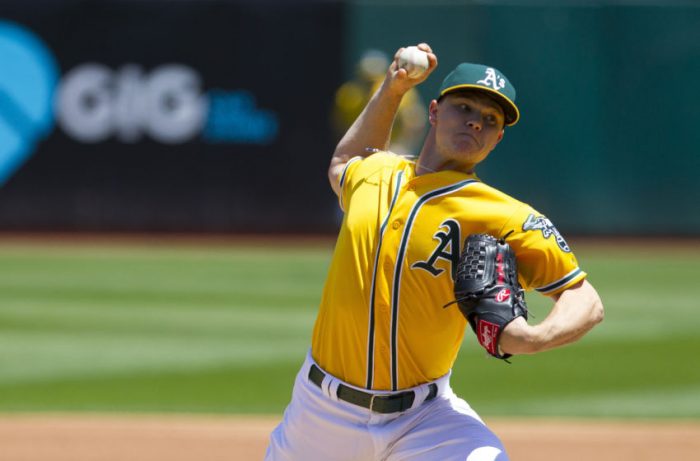 It’s been a hectic month leading up to today’s MLB non-waiver trade deadline. It seems like ages since the Chicago White Sox traded Jose Quintana to the Chicago Cubs for Dylan Cease, Bryant Flete, Eloy Jimenez, and Matt Rose. In reality, that deal went down just 18 days ago.

Since then, every major league team entered the trade market striving to either improve their 2017 postseason chances or brighten their outlook for the future. A few organizations did both preferring to be merchants of opportunity.

With so many players on the move since the all-star break, I thought it’d be fun to present an overview of what’s transpired since both Chicago clubs made the first significant trade of this year’s deadline season.

The White Sox didn’t slow down after making the Quintana deal on July 13. With the club in rebuild mode, general manager Rick Hahn swapped a total of 19 players. 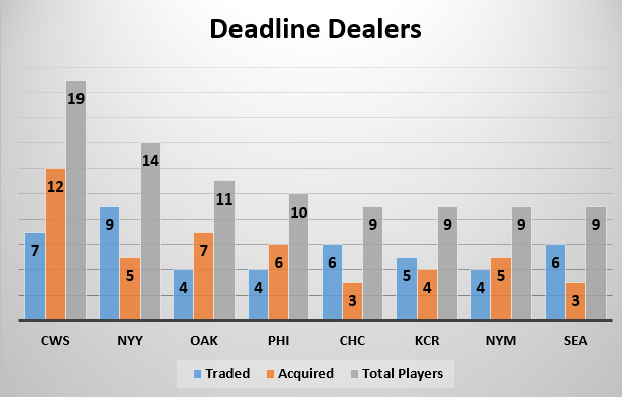 Other highly active clubs included the Cubs and New York Yankees. The North Siders are trying to make a repeat appearance in the Fall Classic, while the Yankees are trying to return to postseason play for the first time they lost the 2015 AL Wild Card game to the Houston Astros.

The most popular commodity pursued by potential buyers was pitching. Nearly three-quarters of major leaguers acquired were either a starting pitcher  or reliever. While not as pronounced as in the major league market, the majority of prospects (59-percent) traded were pitchers too. 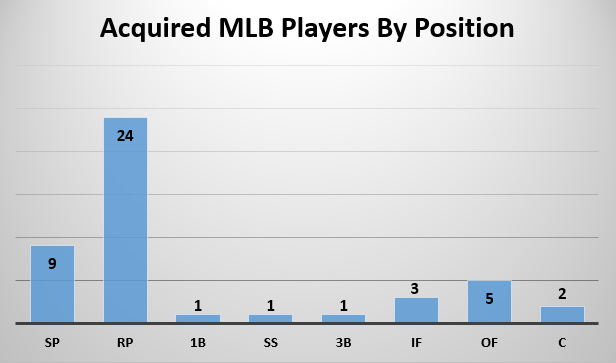 Overall, the market was soft at every other position.

Over 50-percent of players involved in deals were minor leaguers. The next largest demographic on the move were players with 6-9 years of time in the majors. It’s worth noting, I categorized players’ MLB experience based on the years annotated on their individual page at Baseball Reference. 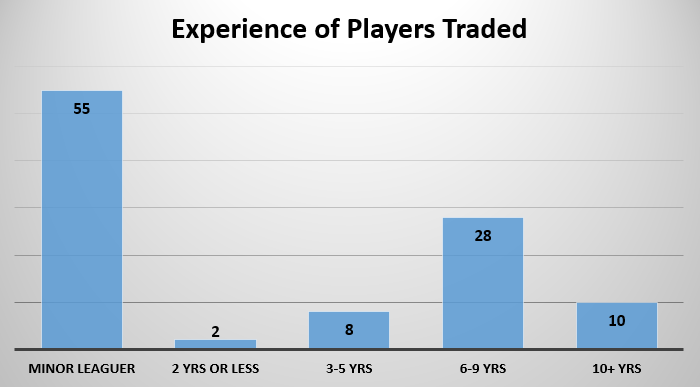 Some fans may be surprised to learn rental players accounted for only 50-percent of big leaguers involved in pre-deadline transactions with a significant number of players have at least two years of club control remaining.

The best of the bunch under team control past this season is Gray. The New York Yankees control the former Cy Young Award finalist’s rights through the 2019 season. 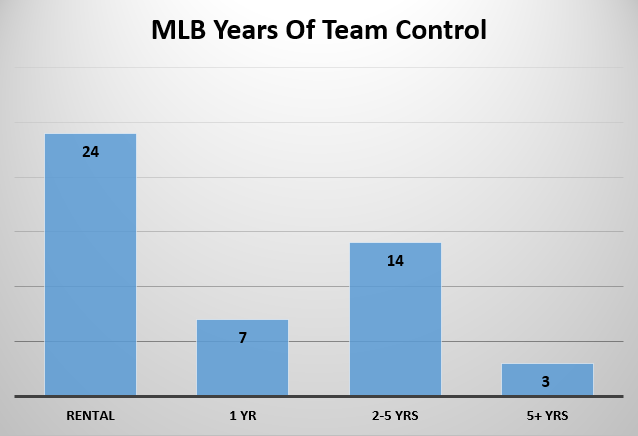 The best rentals include Darvish and relievers Anthony Swarzak, Neshek, and Reed. The top position players are J.D. Martinez and Todd Frazier. All of these players will help their new teams, but the don’t present the same level of value as Gray.

Over 70-percent of prospects acquired are currently playing below Class-AA level. The most recognizable names playing at Class-AAA level include Tyler O’Neill (St. Louis Cardinals via Seattle Mariners) and Jeimer Candelario (Detroit Tigers via the Cubs). Both players are top-100 prospects according to MLB Prospect Watch. 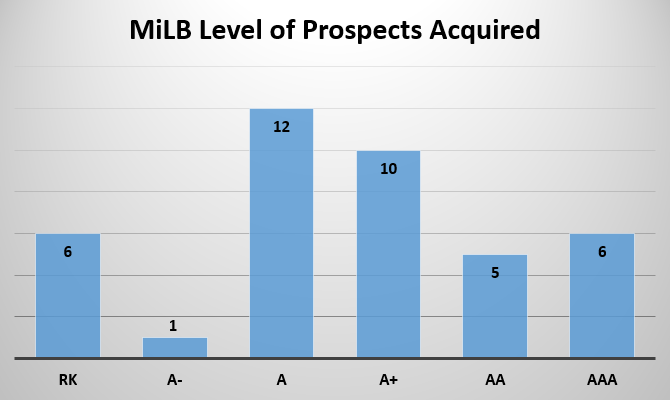 Among the 40-plus minor leaguers on the move, over 70-percent were under age-23.

The youngest player moved was 17-year-old Gregory Santos, shipped in a trade between the Boston Red Sox to the San Francisco Giants that brought veteran infielder Eduardo Nunez to Beantown.

At the other end of the spectrum, a reliever over twice Santos’ age — 40-year-old reliever Joaquin Benoit — was moved by the Philadelphia Phillies to the Pittsburgh Pirates.

About Those Top Prospects

As much as we’ve read and heard about top prospects being potential bargaining chips, a very small portion of traded minor leaguers were ranked in the top-100 by MLB Prospect Watch. Here are the seven best prospects with new addresses.

See You Next Month

The vast majority of wheeling and dealing by 2017 playoff contenders is now complete, but trades will occur between now and August 31 — the true deadline for clubs trying to make the postseason this year.

Next month won’t be as hectic as the last three weeks, but I suspect it’ll be fun watching the last minute maneuvering of executives from contending clubs.