Churchill: What About the Mariners Bullpen? 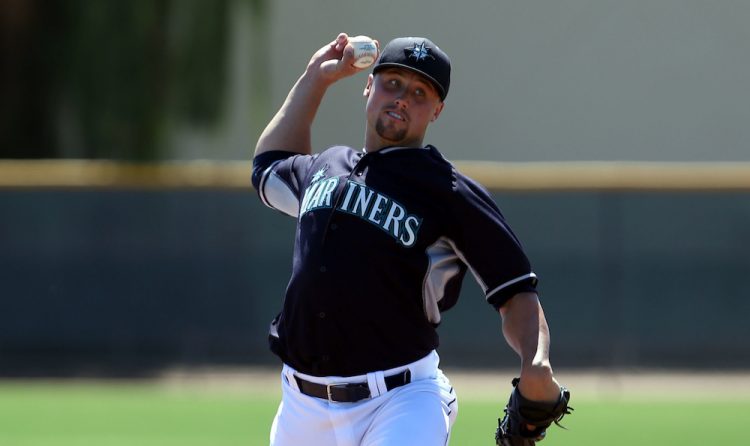 When the Seattle Mariners hired Jerry Dipoto to take over as general manager and executive vice president of baseball operations, I was convinced only of one thing: Dipoto would ‘build’ a bullpen and do it without spending significant resources.

Entering the 2016-17 offseason, I was fully convinced the bullpen needed a proven, lights-out relief arm to share high-leverage duties with Edwin Diaz.

I also believed they were short a strikeout lefty.

While I still believe the latter, I’m not as bullish on the former, at least not to start 2017, and here’s why:

The M’s relief corps has a chance to to be really good.

I know, ‘what the hell, Churchill, you said Seattle needed a big-time veteran relief arm with closing chops and now they don’t?’

Yes and no. As stated above, I no longer believe they need that right now, because the roster boasts at least three potential like-stuff’d young arms. If none step up, Dipoto can look to acquire such an arm over the summer, assuming the club remains in contention that long. Like the quest for a No. 1 or No. 2 starting pitcher, this winter’s price for adding closer-level arms is higher than Blake from Workaholics.

If you compare the options below in terms of raw stuff to the bullpens around the American League, Seattle is in great shape. They simply need enough of them to stay healthy and pitch like they’re capable to support the rest of the club’s efforts.
That wasn’t the case at this time last year, as it was unknown how the club planned to use Edwin Diaz, Dan Altavilla was not ready for the majors and Evan Scribner was set to miss at least a few months to start the schedule.

Edwin Diaz, RHP
STUFF: 70 4FB 95-100 mph, 70 SL 85-88 mph
55 CTL, 45 CMD
Diaz was lights out in his half-season in the big leagues in 2016 and at times was the best reliever in the game. He does it with armside run on a big-time fastball that can reach triple digits. He hasn’t commanded the pitch well, hence a 70 grade despite 80-grade velocity, but he threw enough strikes with it to set up a plus slider.

Diaz still has room to grow, both physically and in terms of overall effectiveness, starting with more consistent location of his fastball.

As a starter, I wanted to see Diaz stay on top of his fastball a little better. In relief, I don’t. Let it fly and create as much late life as possible. Ground balls are not a reliever’s best friend, strikeouts and weakly-struck fly balls are.

Steve Cishek, RHP
STUFF: 55 SI 90-92 mph, 60-65 SL
55 CTL, 45/50 CMD
Cishek’s stuff remains very good, especially considering the natural deception in his delivery. The issue was command, where the right-handed caught far too much of the plate with everything, particularly the sinker and seldom-used four-seamer versus LHBs (5 HR, 76 PA).

Perhaps a more narrowly-focused role in 2017 helps protect a developing weakness versus lefty sticks, but it’s reasonable to believe Cishek’s struggles with the long ball and versus LHBs were somewhat of an anomaly.

He’s just 30 years of age, throwing just as hard as ever and the raw stuff remains the same as in his peak years in Miami. Lefties didn’t consistently beat him last year, but when they did it was with the extra-base hit (5 HR, 5-2B, 12 BB, 117 PA). Even after said struggles, Cishek has held LHBs to a very respectable and reliable .231 BAA and .360 SLGA.

The Mariners do have other options in the late innings this season, however, so don’t expect Cishek’s role to be ‘setup man’ for long if he truggles out of the gate, and there is clear evidence Scott Servais is willing to use inexperienced arms in high-leverage situations.

Dan Altavilla, RHP
STUFF: 65 4FB 94-98 mph, 45 SL 87-91 mph
45 CTL, 45 CMD
I’ve seen Altavilla better in the control and command areas, in both a starting and relief role, but the transition to the bullpen worked despite some questions as to whether or not his fastball would ever play up to where it was in 2016.

Altavilla is a candidate to serve as one of numerous setup options but better fastball command and a better slider will be needed for him to take that kind of step forward in 2017.

The right-hander could be the wildcard in the bullpen for the club this season, perhaps eventually serving as the No. 2 option in big situations.

He doesn’t struggle versus LHBs like Cishek but he served up 11 home runs last season, and that’s never good in the day and age of 70-inning relievers.

Vincent shouldn’t be a high-leverage option but if he finds a way out of pitch purgatory — too often he didn’t have the best of both his fastball and slider and rarely did he have both along with his best command — he can be very useful in the first two-thirds of the game.

The raw stuff appears to be at least similar, but his command has been spotty for a year and a half which has led him to an all-time high usage of his changeup versus RHBs.

He’s the club’s best left-handed bullpen option to start the season and should be at least as effective as Vidal Nuno unless last season was the beginning of a steep decline, of which there is no speficic evidence.

He stays down in the zone well when called for and can climb the ladder with some late run, setting up a terrific curveball he can throw for strikes or bury out of the zone and induce swings and misses.

When healthy, Scribner is as reliable a middle reliever as you’ll find, though he shouldn’t be masqueraded as a high-leverage option, at least not versus dangerous hitters.

Can survive on velocity at times versus RHBs but post-surgery the slider was a full grade or more below what it was. He’ll be two years off the Tommy John procedure that forced him to miss all of 2015, so there’s certainly a chance he’ll regain the snap on the slider as well as his command in 2017.

It’s not out of the question Simmons blows the doors off the Cactus League and starts the season in the majors, but the expectation is he’ll contribute at some point, even if it comes after a stint in Triple-A.

Ariel Miranda, LHP
STUFF: 91-95, SL, CH
45 4FB, 50 2FB, 45/50 SL, 40 CH, 50 CTL, 45 CMD
Miranda has been a starter throughout his pro career, including last season with Seattle, but could offer value as a multi-batter option out of the bullpen. LHBs ripped him to shreds last season because he didn’t have a breaking ball worth a damn, but In relief, the velo could play up a bit, offering more fastball value.

His changeup was his best pitch a year ago, which allowed him to hang around without a quality breaking ball, but eventually the league will catch uo with that, too.

I still view Miranda as solid back-end depth when the rotation needs to catch up with attrition.

James Pazos, LHP
STUFF: 60 4FB 92-95 mph, 45 SL 79-82 mph
45 CTL, 45 CMD
Pazos offers good armside run and deception from a 3/4 slot and a little better fastball than Miranda — not to mention he’s a pure reliever with experience in the role — suggesting he’s the better option as the second lefty in the Mariners bullpen.

Getting Pazos from the New York Yankees in exchange for right-hander Zack Littell (whom I like quite a bit he was going to be in my Top 10) was one of the more underrated acquisitions of the winter for Dipoto, whose quickly earning his nickname of JeDi.

Jean Machi, RHP
STUFF: 55 FB 91-94 mph, 50 SL 80-83 mph,  50 SPL 85-88 mph
50 CTL, 45 CMD
Machi struggled early last season and then was cited for public intoxication and, well, other stupid childish stuff. If he’s healthy, howeverm he can pitch in a middle relief role and could serve as solid depth, thanks to a three-pitch arsenal that makes up for the lack of a plus offering.

He struggles with plane and neither offspeed pitch is consistent, but when he’s right he’ll induce just enough swing-and-miss to survive in a one-inning role.