Subscribe to the Baseball Things Podcast for bi-weekly analysis
The Leonys Martin most thought (I did) the Seattle Mariners would be acquiring is the one we’ve seen in the past with the Texas Rangers. A decent batting average, fringe-average (league) on-base percentages and maybe 8-10 home runs to go with very good defense in center field. The M’s are getting all of that. Already. Including the season-long power. In just seven weeks of the schedule.

Martin’s 4-for-5 Sunday in Cincinnati brought his season line to .252/.331/.467, which, if held through the season, makes Martin a star, probably worth 5.5-6 six wins above replacement. To shed some clarity on how great that is, Buster Posey, Andrew McCutchen and Anthony Rizzo landed in this range a year ago. While it’s a stretch to just presume Martin will keep up his first-quarter pace, rather than just presuming he can’t, let’s look into what’s brought on the recent streak, and see if he’s made any adjustments that may suggest at least some of his production is sustainable… or not.

It’s important to note what Martin has been prior to the 2016, though. Here’s his career marks in some of the more indicative areas offensively:

It’s worth noting Martin was hurt a good portion of 2015, which explains a little of the down scope of his numbers, despite spending the season at 27 years of age.

As you can see above, Martin came into 2016 with below-average walk rates, sub par, yet not awful, strikeout rates that would be better suited for a bat producing more more power, but with a line-drive rate that typically appears on the bio page of a league-average bat. On paper, several things have changed for Martin, but remember, we’re still talking about a small enough sample that just 10 days ago his numbers didn’t look very good.

The latter two, FB rate and HR/FB, aren’t sustainable at their current marks. But they do tell us something important: Martin is hitting more fly balls hard than ever before, and there are reasons why the regression may not push this number down all that far. We’ll get to that in a bit.

Martin’s not being helped by luck, says BABIP, but his recent surge can partially be explained simply by more contact. His strikeout rate has been as high as 39 percent this season just a few weeks ago, and he struck out just twice on the Baltimore-Cincinnati road trip. While that could bring down some of the excitement, stay with me: Martin is finding the barrel more in 2016 (33 percent), than ever before, too, so not only are his line drive hit harder, which is better for extra bases, but his fly balls will leave the yard more frequently. Furthermore, Martin is pulling the ball more (hitters almost always have more natural power to their pull side) at 46 percent, while maintaining a nice balance up the middle (29 percent) and the other way (25 percent). The latter two suggest he’s not sitting on a pitch he can pull and is hitting some balls well to those fields, assisting in hitting for average.

Now, the question is, can he sustain either the higher contact rate of the last few weeks, and/or the power surge we’ve seen — his eight home runs already have tied his career high. Looking into this requires some analysis of his swing. 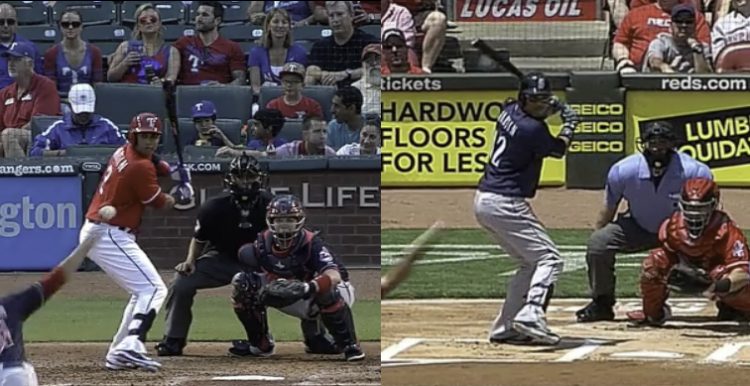 Notice, just as the ball is being released in both shots, the hands are lower on the left than on the right. Triggering a swing from where the hands are low on the left absurdly limits leverage (creates a stiff forearm and wrist area) and usually makes it more difficult to cover the entire strike zone. It also dictates a swing plane far from ideal, and limits bat speed since from there it means a severely limited load with the hands so that power will be determined mostly by hand and wrist strength, and doesn’t give the lower half a chance to help much. So, Martin corrects this by moving his hands up and a bit back toward the catcher: 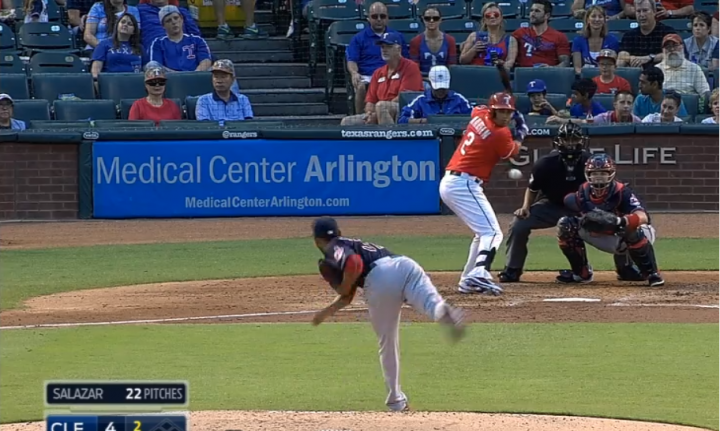 This is all fine and dandy, but it’s too late. He’s done this while the pitch was in flight to the plate. Where the batter’s hands are before the pitch means little — not nothing, obviously, but little relatively speaking. The most important thing is where they are as the pitch is released (and when the swing is triggered), because if he has to go too far or make too great of an adjustment, he simply won’t likely have time to be consistent with his swing; it’ll be different most every time, which breeds nothing but inconsistent results, a bit like we’ve discussed concerning a pitcher’s delivery.

The above-right photo is Martin at pitch release in Cincy. Here’s the same at-bat as the pitch is nearly to the plate. Note the hands compared to pre-pitch: 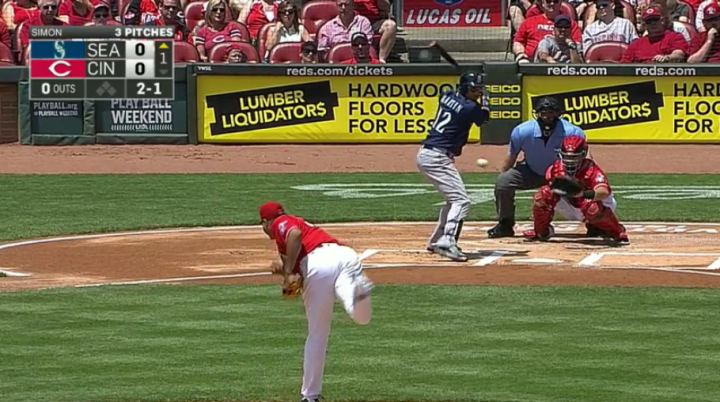 Not only is he keeping his hands stable in 2016, but back as well. When forced to adjust the hand placement so drastically in years past, his trigger placement — the moment he starts the swing itself — isn’t consistent, nor is his catcher-to-pitcher placement (vertical in the photos).

There’s one other aspect of the photos above that are telling. Look at the head of the bat in 2015, and the angle of the bat itself. The bat is upright and the barrel is pointing back toward the pitcher some. This is often referred to as a bat wrap. The barrel is used to hit the baseball, so the distance the barrel has to go to meet the ball is critical. The more severe the wrap, the further the barrel has to go. This creates a longer swing for Martin, impacting his ability to hit good velocity with regularity, which in turn makes him susceptible to just about everything else — since he has to protect (cheat) against the fastball some. We hear all this bull about staying “behind the baseball” but you still have to meet the ball in front of the plate if you wish to drive it to any part of the ballpark.

In 2016, Martin’s bat is at an angle more consistent with the kind of trajectory that produces hard-hit line drives and fly balls, and the barrel, while still somewhat pointed toward the pitcher, is much more ideally angled, too. He still waggles it toward the pitcher pre-pitch sometimes, which ideally will go away altogether, eventually.

We’ve heard Mike Blowers comment on the Root Sports Broadcast about the bat wrap and that Edgar Martinez has been working with Martin on that very thing.

The hands are in a better position to trigger the swing, the bat head is in a better spot to be sent to attack the pitch and the bat angle helps Martin create a more consistent and healthier bat path (swing plane). The swing itself is a bit shorter, too, which can help with contact and consistency. I also have noticed he’s setting up a little more closed at the feet, hip and shoulder than he was a year ago. It’s not easily noticed by the naked eye, but it’s there and part of his set of adjustments this season.

It’s working. All of it.

Basically what these adjustments have done for Martin is give him a chance to use his plus bat speed, creating a little more power. I don’t expect his home run pace to continue — that’d be 30-plus long balls — but his early showing of pop is rewriting his book around the league. He’s hitting fastballs, changeups, sliders, curveballs, cutters; you name it, Martin is hitting them hard enough to make it a little tougher to pitch to him, and he’s not getting himself out as much as he was even earlier in the season.

Despite some of his early trends being unsustainable, a lot of what he’s doing is. The walk rate may not stay between 10-11 percent, but there’s no reason he can’t live in the eight percent range. He won’t hit 35 home runs, but he’s hitting balls harder more often — 33 percent in 2016 versus 24.9 percent for his career to start the season — and these mechanical adjustments suggest a good portion of that is real, too.

He may not finish the year at .252/.331/.467, but the first two are sustainable within five percent or so, and I’d wager many-a red cents Martin sets a career high in slugging percentage by at least 40 points — .385 is his career best.

It’s early, but Martin, who is in his peak years athletically, may show a rather large spike in performance this season. While we’d all like to give credit to Edgar Martinez, and he certainly deserves some of it, the greatest skill here is Martin’s ability to put this to work in the batter’s box effectively and consistently. We’ve seen flashes of it for seven week and the past 10 days or so he’s been as good as he’s ever been in all facets. It’s going to be a fun season regardless, as the club begins an eight-game home stand in first place this late in the season for the first time in 13 years. But if Martin sustains a lion’s share of his success thus far, the Mariners’ season may not end until the Seattle Seahawks have played half their own regular season.