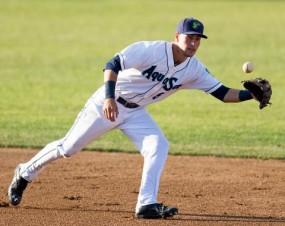 The Seattle Mariners’ farm system is thin, especially at the top, but it doesn’t lack for legitimate tools, particularly in the field and at the plate. The club’s 2015 Draft class provides some help, but a couple of mid-season deals made by the previous regime contributed to this list, too.

Best Tools
Fastball
Starter: Luiz Gohara
Has been up to 97 mph, typically sitting 92-95. In 2015, many outings showed 90-94. Will need to show better in all other areas for it to matter, anyway, but the firmer version is a big-time offering for a left-hander.
Runner-up: Jacob Brentz
Questions about future role, but up to 95 as rotation member.
Reliever: Kyle Wilcox
Up to 97 mph with life up in zone. Ramon Morla up to 99 mph before surgery.
Curveball: Ryan Yarbough
Merely average at times, but plays up when his fastball-changeup combo is rolling.
Slider: Edwin Diaz
Not quite a wipeout pitch, but it’s getting there; In a relief role it may play up.
Changeup: Andrew Moore
It’s at least fringe-average to big-league standards at present, flashing plus.
Command/Control: Moore
Plus control — plus-plus at times — with above-average fastball command, average or better command of changeup, curveball.

Athlete: Drew Jackson
Physical tools suggest he can play anywhere; arm, lateral quickness and footwork are solid for shortstop. Plus speed, off-the-charts instincts all-around.
Runner-up: Boog Powell
Tyler O’Neill is a close third here, but falls a little short. Powell is a tick faster and a full grade quicker.
Infield Arm: Joe DeCarlo
Accuracy improved in 2015, as did release. Pure strength never a question.
Outfield Arm: Austin Wilson
Wilson is more accurate than a few others that have similar raw arm strength, earning him the honors here.
Infield Glove: Jackson/Tyler Smith
Among the Top 25, Jackson and Smith are that close. Rayder Ascanio is better than both of them, however.
Outfield Glove: Braden Bishop
Powell is a bit more polished here, but Bishop gets terrific jumps and in a short period of time showed better routes between Day 1 at Everett and the end of the season.
Hitter: Alex Jackson
The best future hit tool remains in Jackson’s hip pocket. Smith is a relatively-close second.
Raw Power: Gareth Morgan
Just watch batting practice once. That’s all it will take to convince you. Light tower power from alley to alley.
Catcher Glove: Steve Baron
He came into pro ball with a defensive reputation; started over in some ways and is back to being a solid-average receiver with the physical and mental capacity to deal with big-league arms daily.
Catcher Arm: Baron
Still working on pop times and consistency but in terms of pure arm strength among those with any shot at MLB time, Baron is the choice.

Potential Fast Risers
I tend to be the opposite of bullish on prospects that have yet to make their mark in the states, or have limited exposure in affiliated ball in America. This is represented below, with Torres a potential Top-5 prospect in a year.

Christopher Torres
Keith Law already ranks him top-10 and I know how much the club’s international scouts love Torres; very difficult for me to rank Torres that high before he shows in the states, despite a very weak system overall.
Luis Rengifo
Bit of a sleeper that could serve as Torres’ double-play partner if he makes it to the U.S. this season.
Luis Liberato
The tools are there, but his feel for the game in general lacks, including situationally at the plate. His mechanics are a bit unorthodox, too, making it a little more difficult to scout.

On the Hot Seat
Luiz Gohara
Jackson isn’t here yet, but Gohara has literally done nothing in two-plus years to lend confidence he’s going to work hard enough to put his natural abilities to use. If he does, he’s a top 5 prospect in any system.
Austin Wilson
He’s 24 and entering 2016 has yet to sniff Double-A. Probably a make or break year in some ways. If he struggles in Jackson, he’ll start receiving a lot more ‘NP’ tags.
D.J. Peterson
He’s a step or two from the majors and there’s not a soul blocking him beyond 2016. He’ll be two full years removed from being hit in the face when the season STARTS and new Rainiers hitting coach Scott Brosius will be in his ear. Either he hits or he doesn’t. More injuries may do the same to the confidence level he’ll be valuable beyond Triple-A.

What About Hultzen?
I love Danny Hultzen. I’ve never heard a bad thing about the person or the player. He’s smart, has the reputation of working as hard as any player I’ve ever heard; when he was right, he was 90-9 mph3 with movement, a plus changeup and two useful breaking balls. Then he got hurt. The club has said he’ll be used in a relief role in 2016, and while there certainly is a chance he’ll remain in such a role for the remainder of his career, that decision hasn’t been made, and won’t be made until Hultzen and the team learn more about his surgically repaired shoulder. He looked terrific in a few short stints last March but was shut down after several short ‘starts’ for Jackson where the lefty was very much up and down in all facets, including velocity, stuff and command.

2016 Draft Note
The Mariners select No. 11 overall in this year’s draft and it’s a solid class, bettering at least two of the last three and three of the last five in terms of first-round depth. There’s no clear No. 1 talent as the amateur season gets under way this week, but this kind of a class benefits those drafting after the top few picks.

Stay tuned for continued coverage of potential candidates for the Mariners at No. 11.