Arkins: No Quick Fix For Mariners Base Running 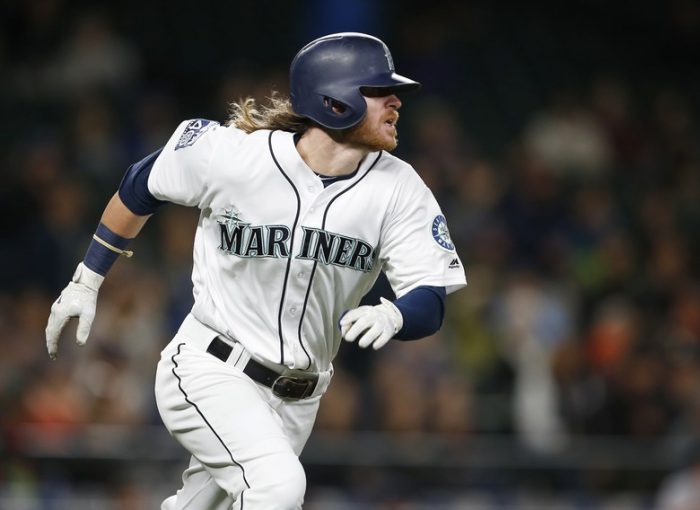 Last week, we learned the Seattle Mariners began their offseason by reshuffling their field staff. Among the casualties, first base coach and base running mentor Casey Candaele. Media reports suggest the Mariners’ lackluster performance on the bases factored into the 56-year-old’s dismissal.

We may never know the full story behind Candaele’s departure, but one thing is certain. A coaching change alone won’t fix Seattle’s base running issues.

Sure, a new voice may bring out the best in some. However, there aren’t enough players on the current roster to “coach up.” In fact, several key contributors set to return next year are trending towards regression.

Before discussing these players, let’s brush up on several base running metrics.

For those wondering, the fastest runner in the majors was Byron Buxton of the Minnesota Twins (32 ft/sec). Seattle fans won’t be surprised Albert Pujols (23 ft/sec) of the Los Angeles Angels was the slowest.

Extra base taken percentage (XBT%) from Baseball Reference reflects the proportion of times a runner successfully took an additional base on a hit. For instance, advancing more than one bag on a single or more than two on a double.

The Mariners had at 37 XBT% last season; league-average was 39-percent.

Also from Baseball Reference, outs on base (OOB) captures failed attempts to advance on a hit, passed ball, wild pitch, or other plays not requiring the runner to leave their base.

The Mariners made 59 OOB; fifth worst in the AL.

FanGraphs uses a comprehensive statistic known as Base Running (BsR) to assess a runner’s value. Success rates for stealing bases, taking the extra base, and avoiding preventable outs all factor into calculations.

I realize there’s a redundancy by including XBT%, OOB, SB, and CS with the all-encompassing BsR. However, doing so will help illustrate the individual strengths and weaknesses of players.

The Mariners were number-27 in the majors in BsR after finishing 2016 similarly (26th). Here’s how to negatively affect BsR and a club’s win probability.

Okay, back to the Mariners.

Let’s start by reviewing players unlikely to improve regardless of the coach, their training regimen, or any sorcery applied.

It Is What It Is

Listed below are hitters with 250-plus plate appearances in 2017 and currently under team control next year. Above average XBT% and Sprint Speed are highlighted.

Although Taylor Motter checked in just below league-average in the speed department, he did contribute positive value thanks to effective base thievery.

Still, the likelihood Motter gets the opportunity to impact the Mariners’ offense in any respect next season is fleeting.

The versatile 28-year-old slashed just .198/.257/.326 in 258 plate appearances. I suspect general manager Jerry Dipoto upgrades the utility spot with someone with better credentials.

The remaining players — Robinson Cano, Nelson Cruz, Kyle Seager, and Mike Zunino — are more likely to lose speed than improve on the bases. Perhaps, the quartet can improve their XBT% to some level.

That said, I wouldn’t plan on any significant breakthroughs. The 34-year-old Cano has been below league-average for the last three seasons, while Cruz (age-37) has a career 30 XBT% in 13 seasons.

Seager posted a slightly above average XBT%, which isn’t surprising. The 29-year-old has a career 42 % XBT. Interestingly, his 0.9 BsR was significantly better than his three-year average (-2.8) coming into 2017.

How did the former North Carolina Tar Heel improve?

Seager hit into just six double plays in 2017 after hitting into three times as many the year prior. That sounds encouraging until you notice his 51.6-percent fly ball rate was eight points higher than his career average.

Considering Seager had an off year at the plate, he’s likely to mechanically address the fly ball issue and subsequently hit into more double plays. That’s not a necessarily a bad thing, assuming he’s getting on base more often and delivering more power in 2018.

While Zunino may be able to improve his XBT%, keep in mind he’s a catcher. League-average Sprint Speed (25.9 ft/sec) for backstop ties designated hitter for slowest from any position group.

Now, it’s time to discuss Mariners with a reasonable chance to improve through coaching or their own efforts. It’s not a long list.

As with the preceding table, each player had 250-plus plate appearances and is slated to return. Once again, I’ve highlighted above average XBT% and Sprint Speed.

The first thing to catch my eye is something we all intrinsically know, but sometimes forget. Speed doesn’t necessarily translate to base running success.

All four players listed have above average speed. Yet, only Ben Gamel provided positive value on the bases.

Seeing Gamel’s name atop the list may surprise some fans. After all, the 25-year-old made several notable gaffes on the bases and owned the fourth worst OOB total in the majors.

Despite those mistakes, Gamel’s 3.5 BsR was second best on the Mariners behind pending free agent Jarrod Dyson (5.6). Moreover, the rookie ranked number-40 in baseball.

Most of Gamel’s base running miscues are attributable to being overly aggressive. Through time, it’s reasonable to expect a player with just 167 games of big league experience to strike a better balance between aggression and patience.

The base running inefficiency of Jean Segura had nothing to do with inexperience. Rather, a strained hamstring and high ankle sprain slowed the 27-year-old.

Despite his health challenges, Segura managed to steal 22 bases. Considering the shortstop averaged 4.2 BsR during 2015-16, expecting a rebound next year is reasonable.

The dynamic outfield play of Guillermo Heredia confirms his quickness. But, being thrown out during five of six stolen base attempts partially led to the 26-year-old’s below average -1.3 BsR.

Unbeknownst to the public, Heredia struggled through the season with a separated shoulder. While an upper body injury may seem independent to base running, try jogging with a painful arm or shoulder.

Mitch Haniger registered just three OOB this season. Unfortunately, the earlier video captured one of those occasions. The 26-year-old is very capable of being more valuable by simply base stealing proficiency and XBT%.

Since I put Haniger in a bad light earlier, I wanted to atone with a video redemption demonstrating his ability to shrewdly take the extra base and help his club win. I expect we’ll see more of this type of result in 2018.

Obviously, Seattle needs more players like Gamel, Heredia, Segura, and Haniger to offset their aging slow-footed veterans. But, team management is facing a bigger challenge that may not be fixable by simply replacing coaches or adding new players.

One key aspect of coaching — or any form of leadership — is the ability to influence your target audience. Perhaps, that’s why Candaele is no longer with the Mariners.

Having said that, accountability is vital to reinforcing the philosophy of any organization. Ultimately, that responsibility rests with manager Scott Servais.

I’m not at all suggesting the Mariners should fire Servais. Nevertheless, accepting poor execution is a reflection of leadership — not players.

Perhaps, replacing Candaele is a good first step. But, what’s the next move if players continue to underachieve or remain tone deaf to the message?

The answer to that question will help determine the success of the 2018 Mariners and the future of their manager.