My AL West All Stars 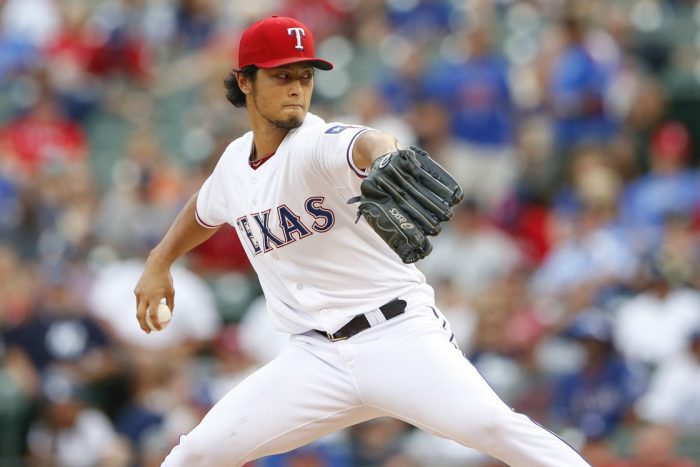 The AL West division race looks to be a very competitive affair this season. With that in mind, I thought I’d have some fun by constructing an all-star team solely comprised of players from the division.

As I researched options, the primary criteria for selection was my perception of the player’s 2017 potential and their history. Age also came into play when I found myself splitting hairs.

Without further ado, let’s get started.

In the AL West, unproven players or veterans will dominate first base on the wrong side of 30. In one case, both.

Houston manager A.J. Hinch plans to go with Yulieski Gurriel. The 32-year-old Cuban was signed with the Astros as an international free agent last July. He’s never played first base during his 15-year career.

Rookie Dan Vogelbach and Danny Valencia are expected to platoon for the Mariners. The allocation of playing time will be largely dependent on Vogelbach’s acclimation to the big leagues.

Luis Valbuena has been a third baseman in recent years and has just 34 starts at first base since 2015. But, Angels third baseman Yunel Escobar is under contract for one more season. That means Valbuena will likely displace incumbent first basemen C.J. Cron.

The Athletics appear to be leaning towards their own rookie/veteran combo with Yonder Alonso and youngster Ryon Healy.

Having said that, Alonso had the lowest OPS among qualified big league first baseman last season and Healy is expected to see time at third base and designated hitter too.

In the end, I reluctantly settled on Napoli, who’s starting his third stay with the Rangers. Still, it’s plausible James Loney — signed to a minor league deal by Texas– could spend more time at first base.

It was equally challenging picking a second baseman, but for the opposite reason I struggled with first base — quality in the form of Altuve and the Mariners’ Robinson Cano.

Opting for Altuve over Cano won’t impress my neighbors. But the Astros’ second baseman bested his Seattle rival in every offensive category with the exception of home runs and is seven years younger.

Honestly, when I started to pick a team in my head, I was certain Carlos Correa of the Astros was my shortstop.

In the end though, I tabbed Simmons, who possesses elite defensive skills and is capable of delivering league average-ish offense.

Correa is a far superior hitter, so are Elvis Andrus (Rangers) and Jean Segura (Mariners). But, they can’t match the glove work of the 27-year-old Simmons.

While I just made fans in the Emerald City happy, folks in Arlington are equally displeased.

Adrian Beltre of the Rangers had a better year than Seager. But, as with my Altuve/Cano conundrum, I went with the younger player in his prime.

Although he’s a future Hall of Famer, Beltre turns 38-years-old in early April.

As with first base, the left field choices weren’t particularly appealing — at least to me.

Initially, Khris Davis of the Athletics came to mind. But, he was Oakland’s designated hitter 53 times last season and may spend more time there this year.

Next, I mulled over Nori Aoki of the Astros. Then, visions of his meandering outfield routes and zany base running brought me to my senses.

Names such as Ryan Rua and Joey Gallo from the Rangers made me think about Aoki again.

Seattle’s Jarrod Dyson was a possibility. But, he’s never played a full season. The 32-year-old made a career-high 337 plate appearances in 2016.

That’s how I got to Maybin.

The tenth overall pick from the 2005 MLB Amateur draft hasn’t logged first-round caliber stats during his decade as big leaguer. Still, he did have a career offensive year with the Detroit Tigers last season.

Besides, Los Angeles has some kid from Jersey patrolling center field. I hear he’s pretty good.

Speaking of that kid, I decided Trout was my center fielder before I even came up with the idea for this piece.

Through his first six seasons, the 25-year-old offensive numbers eerily similar to Mickey Mantle and some other ‘Kid’ — Ken Griffey Jr.

Instead of sharing a video highlighting the Millville, New Jersey native’s out-of-this-world talent, I chose one with him falling on his face.

Why? He looks more athletic than many players do when jumping back to his feet. Plus, his gregarious exchange with Altuve afterwards signals a love for the game that endears him — and Altuve — to fans everywhere.

I never expected I’d end up an “all Angels” outfield But, that’s how it worked out.

If George Springer weren’t moving to center field in Houston, he would’ve been my guy. Instead, I chose Calhoun.

Already a strong defender, the 29-year-old put together the best offensive season of his five-year career. Now, “Red Baron” is a key building block for the Angels — along with Trout and Simmons.

After Trout, this was the easiest pick.

With a hitting catcher becoming rarer with each passing season, the 30-year-old is one of the few backstops with strong offensive and defensive skills.

Lucroy had the highest OPS among all big league catchers and his 3.8 WAR was second only to Buster Posey (4.7) of the San Francisco Giants.

Although I’m not thrilled he turns 38 in July, there’s no denying “Boomstick” is a game-changer. Only newly retired David Ortiz was a better designated hitter last year.

Besides, how could I turn my back on a hitter guy who can launch moonshots like the one in the preceding video and compel Dave Sims of ROOT Sports channel his inner Ric Flair?

After missing all of 2015 due to Tommy John surgery, the 30-year-old only pitched 100.1 innings last season. But, he’s still my choice.

Seattle’s James Paxton could make me regret not picking him. The southpaw’s 2.80 FIP was second lowest in baseball behind Clayton Kershaw of the Los Angeles Dodgers.

While Madson had a decent year, I went with Diaz — youngest of the closer replacements.

The 22-year-old didn’t become Seattle’s full-time closer until August. Nevertheless, his dynamic performance throughout his rookie campaign made him a “must select” for me. Only Dellin Betances of the New York Yankees had a higher SO/9 than Diaz’s 15.33 rate.

Is it possible the hard-throwing right-hander suffers a sophomore setback? Absolutely. On the other hand, his age and electric stuff make him worth the risk.