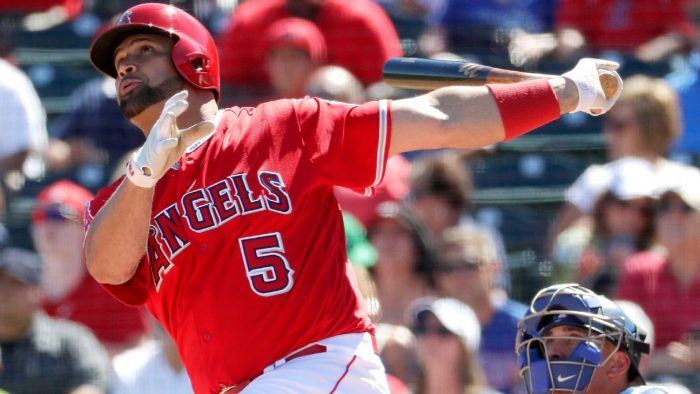 Albert Pujols of the Los Angeles Angels is on the brink of doing something wonderful and historic — join the 600 home run club. Yet, this impending milestone is generating relatively little excitement among Angels fans.

Media members have suggested various reasons for the muted interest. Among them; the home run losing its luster in the post-steroid era, the increased focus on the young stars of baseball, and the large shadow cast by Pujols’ superstar teammate Mike Trout.

Certainly, any or all of these factors could contribute to fan malaise. But, there’s another possible explanation.

Pujols hasn’t lived up to the lofty expectations placed on him when he signed a 10-year/$240 million deal with the Angels in 2011. In a nutshell, his on-field performance since moving to Anaheim hasn’t given fans a reason to embrace him.

Before delving into Pujols’ record with the Angels, let’s discuss the resume he built with his original club — the St. Louis Cardinals. After all, that’s what prompted team owner Arte Moreno to commit nearly a quarter-billion dollars and a decade to Albert.

During his eleven seasons as a Cardinal, Pujols led all hitters in home runs (445), but he was far more than just a slugger. He possessed a unique blend of power and hitting ability and was arguably the best all-round hitter in baseball. To illustrate, I’ve included the following table sorted by total hits.

As you can see, Ichiro Suzuki and Derek Jeter had more hits than Pujols, but look at their batting average, on-base percentage, and slugging percentage. The former Cardinals first baseman bested the duo in all three categories.

Perhaps, the most amazing accomplishment by Pujols was hitting nearly 200 more home runs than Ichiro and Jeter did combined while walking more and striking out less than either player. He truly was “The Machine.”

Pujols’ exploits at the plate propelled his team to the postseason seven times and two World Series championships. Individually, he was Rookie of the Year, a three-time NL MVP (runner-up four other times), a six-time Silver Slugger winner, a Gold Glover twice, and an eight all-star.

That brings us to Pujols’ six years with Los Angeles. Unfortunately, the numbers have been far less impressive. The 17-year veteran has one all-star selection and he’s finished number-17 in MVP voting twice.

The preceding table demonstrates Pujols hasn’t generated the same levels of production with the Angels — not even close. Throw in the fact Los Angeles has just one postseason appearance since his arrival and it becomes clear why some Halo fans may not be inspired by the impending 600 homer milestone.

To be clear, I’m not suggesting Pujols hasn’t provided value to his club. He’s delivered three-plus bWAR during three seasons and averaged 29 home runs annually. Moreover, he’s steadfastly remained in the lineup despite being slowed by injuries.

Still, Pujols’ production with the Cards dwarfs anything he’s accomplished for Los Angeles. It’s hard to get around that fact and the expectations his St. Louis career established with Halo faithful.

About those Angels fans I’ve been discussing. They’re not the problem. The Angels are currently averaging 35,780 for home games — seventh best in the majors. That’s impressive support for a club with a losing record last year and hovering around .500 this season.

The harsh reality is players leaving for greener pastures have to build a relationship with their new fan base through on-field accomplishments. Otherwise, fans aren’t likely to embrace career milestones predominantly achieved in a different zip code.

Perhaps, that’s why David Ortiz and Jeter received so much adulation from fans when they reached 500 home runs and 3,000 hits respectively. Big Poppy didn’t spend his entire career with the Red Sox, but his greatest days were in Beantown. Captain Clutch spent his entire career wearing Yankee pinstripes. Both are beloved.

It’s possible fan reaction to Pujols reaching 600 home runs would’ve been greeted with as much fanfare if he stayed in St. Louis. We’ll never know.

Am I suggesting every player who opts for free agency will experience the same fate as Pujols? Of course not. But, they’ll need to deliver results for their new club.

A good example of writing a second chapter to a storied career is Robinson Cano, who’s providing the Seattle Mariners with elite-level performance. As a result, he’s become a fan favorite in the Emerald City. If Cano ever helps bring a title to Safeco Field, he’ll have street named in Seattle named after him.

Unfortunately, a similar story won’t be written about Albert Pujols. That saddens me because he’s an all-time great deserving of more recognition.

Personally, I intend to celebrate Albert’s entrance into the 600 home run club and the rest of his career.

Hopefully, Angels fans — and Cardinals fans — will join me.