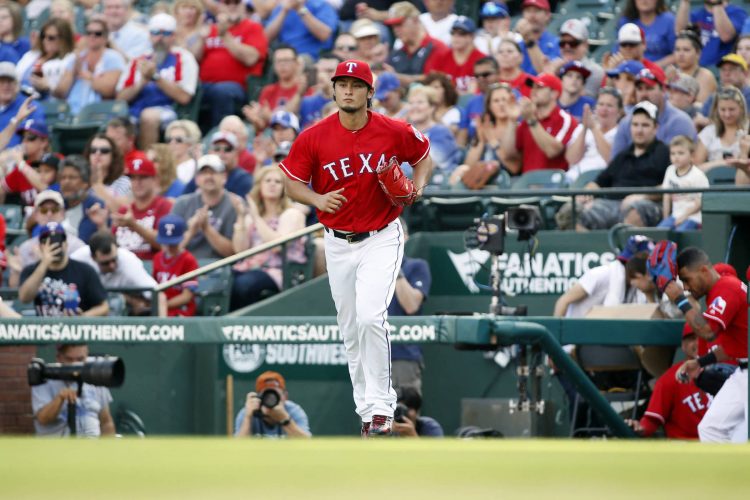 With that in mind, I thought I’d provide a primer for each club in the American League (AL) West division to see where the Mariners and their divisional roster stand as the August 1 trade deadline approaches.

After being swept by the Athletics on May 18, the defending division champions went on a 23-6 tear and currently possess the best record in the AL and a commanding 8.5 game lead over the Mariners in the AL West. With so much going right, the Rangers appear ready to make a deep postseason run and possibly win the first World Series in franchise history. That’s why they’re likely to be active players in the deadline deal market.

The roster spots that Texas attempts to improve will partially depend on the recovery of players currently on the disabled list (DL) and the production of several position players.

The most glaring injury snag involves starting pitcher Yu Darvish, who looked impressive after missing last season due to Tommy John surgery. Unfortunately, for the club and the 29-year-old, he returned to the 15-day DL with neck and shoulder tightness after only three starts.

Although he’s eligible to return this week, Darvish has yet to throw from a mound. His status has to be the key planning factor for the club’s front office as the deadline approaches.

Reliever and Seattle native Keone Kela had surgery to remove elbow bone spurs in April and hopes to return by the all-star break. Assuming there are no setbacks, getting the 23-year-old back would be a boost to a bullpen that currently ranks in the bottom third of the AL.

During his rookie season in 2015, DeShields took over the center field job from current Mariner Leonys Martin and flourished in the lead-off spot with a .344 on-base percentage (OBP) and 25 stolen bases. This year, however, the 23-year-old struggled at the plate during the first five weeks of the season. As a result, he’s currently playing at Class-AAA Round Rock. Perhaps, his stay in the minors will help DeShields regain his form so he can help the ball club during their pennant push.

Moreland has also been scuffling at the plate with his batting average and OBP hovering 20 points below his career norms. Fortunately, for the veteran and Texas, Moreland’s bat has shown of life of late — he’s slashing .361/.410/.861 during the last two weeks. If the left-handed hitter can’t sustain his improvement, the Rangers may first look to other options within the organization to improve first base production.

This season, the Rangers have used Ryan Rua,  Jurickson Profar, and top prospect Joey Gallo at first base on a limited basis. All are inexperienced at the position and it’s possible none of them would be the solution, if Texas opted to make a change.

The biggest drop in performance belongs to Fielder. At the start of today’s action, the Rangers designated hitter is slashing .200/.269/.310 with just five home runs after winning the AL Comeback Player of the Year award last season. Complicating matters for the Rangers is the fact that he’s owed approximately $110 million through the 2020 season — his age-36 season.

Despite the offensive struggles of Fielder and Moreland, the Rangers have flourished thanks to their long lineup and the emergence of former shortstop Ian Desmond in center field, Rookie of the Year candidate Nomar Mazara in right field, and Profar. All three men have helped fill gaps caused by injury, suspension, and poor performance. But, there’s still work to be done with this roster, if the club wants to return to the Fall Classic.

Although adding depth to the relief corps was a priority for general manager Jon Daniels during the offseason, the club’s bullpen has been a weak link. The unit has been better lately, but it’s currently not good enough for a serious postseason contender.

Daniels’ biggest bullpen acquisition — Tom Wilhelmsen — struggled during the first 10 weeks of the season and is no longer with the organization after refusing a minor league assignment. Another new addition, Tony Barnette hasn’t performed well during his debut season in MLB. Used primarily as a middle reliever, opponents are batting .315 against the Federal Way, Washington native in 27 games.

The back-end of the bullpen has been a concern too. Manager Jeff Banister removed Shawn Tolleson from the closer role due to ineffectiveness and inserted Sam Dyson. To date, the hard-throwing right-hander has been effective, while holding opponents to a .206/.270/.265 slash in June. With that said, adding a front-line closer would permit the team to move Dyson back into the setup role and immediately deepen the bullpen as a result.

New York Yankees relievers Andrew Miller and Aroldis Chapman are possible options for the Rangers. Either could be season-changers for the ball club. However, it’s important to note that the Yankees haven’t waved the white flag to concede the season. Furthermore, this team hasn’t posted a losing record since 1992. Becoming a seller will be a rapid departure from the norm for the organization and its fans.

The starting staff has been solid, but a serious World Series contender could use another strong arm at the top of the rotation, especially with questions about Darvish’s recovery.

A player who could interest Daniels is starting pitcher Julio Teheran of the Atlanta Braves. A few weeks ago, Jim Bowden of ESPN concluded that the 25-year-old could be the most coveted pitcher at the trade deadline. Although I suggested that the right-hander would be a good fit for the Boston Red Sox or Toronto Blue Jays, he’d be make sense for the Rangers too.

Teheran is owed a relatively low $25.3 million through the end of the 2019 season with a $12 million club option for 2020, his age-29 season, and he’s performing at a high-level — number-seven among National League (NL) starting pitchers in wins above replacement (WAR).

The Braves don’t have to rush to trade their star pitcher and could opt to hold him until the offseason, or just keep him. With such an advantage, they’ll be able to ask for a lot of value in return and Texas could certainly meet their needs, if they want to.

Perhaps, the Rangers will pursue Athletics starter Rich Hill, who is a free agent at the end of the season and have much lower price tag. If Hill is healthy — he’s currently on the 15-DL with a mild groin strain — he’ll be a hot commodity in the trade market.

Trade rumors have linked Milwaukee Brewers catcher Jonathan Lucroy and the Rangers, but I suspect that the organization is more likely use its available chips to address other areas of concern first.

To date, the Rangers’ backstops — Bryan Holaday, Bobby Wilson, Robinson Chirinos, and Brett Nicholas — have done a nice job at holding down the position. The quartet has delivered reasonable offensive performance and value — .254/.309/.458 slash and the seventh highest WAR in the majors from the catcher position.

If Daniels wants to make a blockbuster to fill any of his needs, as he did by acquiring Hamels last year, he has the pieces to do so. The Rangers have a deep minor league system, which ranks number-nine in the majors, according to Keith Law of ESPN, and boasts four players on the MLB.com Top-100 prospect list.

The Hamels deal was a significant game-changer for both Philadelphia and Texas. The Phillies picked up three MLB.com Top-100 prospects — Jorge Alfaro, Jake Thompson, and Nick Williams — plus, pitchers Alec Asher and Jerad Eickhoff, currently pitching near the top of the rotation. Conversely, the Rangers landed a top starting pitcher and a reliever — Jake Diekman — both under team control through at least the 2018 season.

Would Texas be willing to make another mega-deal? Sure, but I suspect the haul would have to include controllable players — not just rentals — just like last year. Regardless of the Rangers’ approach, it’s certain that they’ll improve their roster between now and the deadline. Whether division rivals are willing to keep pace with them remains to be seen.