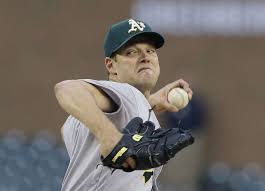 Let’s start with the Oakland Athletics.

It’s been a tough season for the Athletics. Many observers didn’t expect the club to contend, but no one could have foreseen the string of injuries that have plagued Oakland during this season. How bad has it been for the team? Seven of the 25 players on their Opening Day roster have spent time on the disabled list (DL).

Considering the toll injuries have taken on the team — 14.5 games behind the division leading Texas Rangers and in last place — Oakland is poised to be a big seller, if they opt to go in that direction.

To date, the Athletics have made one minor deal; utility-man Chris Coghlan to the Chicago Cubs in exchange for infielder Arismendy Alcantara. The 24-year-old was a top-100 prospect as recently as 2014, but he’s struggled during limited opportunities in the majors.

Despite his early problems in the majors, Alcantara is a good fielder and possesses home run power and stolen base speed. Also, he’s spent time in the outfield. Perhaps, he can flourish into a younger, cheaper version of Coghlan.

Injuries have not only affected the Athletics roster, but they could also influence the marketability of several potential trade chips.

Reddick is currently rehabbing from a broken thumb and recently started hitting ball off a tee. Assuming that he’s back and healthy by the deadline, the soon-to-be free agent will be an attractive target for teams looking to upgrade their corner outfield positions.

It’s important to note that hand injuries can hinder a hitter’s return to productiveness. I have no insight into the extent of Reddick’s injury, but his effectiveness at the plate bears watching after he returns. Certainly, possible suitors will be doing just that.

Another value trade chip currently on the DL is Hill. The southpaw has held opposing hitters to a .207 batting average and — like Reddick — set to be a free agent at the end of the season. Considering that the observers view the starting pitching market as thin, Hill should be in high demand — assuming he fully recovers from his strained groin.

The Athletics have several relievers who could draw interest from clubs looking to boost their bullpen for a postseason push. Veteran John Axford has been particularly strong against right-handed batters this season, while primarily pitching during seventh and eighth innings. Axford is under contract through 2017 and owed $5.5 million next season.

Southpaw Marc Rzepczynski is another soon-to-be free agent who could garner interest from teams trying to boost their middle relief. Versatile reliever Fernando Rodriguez has one more year of arbitration eligibility remaining and making $1.05 million this season. The 32-year-old has made 12 appearances lasting longer than one inning and has held hitters to .971 walks plus hits per-inning pitched (WHIP).

Axford, Rzepczynski, and Rodriguez aren’t back-end of the bullpen types. But, any of them would help deepen the relief corps of a contending ball club.

Southpaw Sean Doolittle is a name certain to come up during trade speculation, but Oakland doesn’t have to race to deal their former closer. The 29-year-old is relatively affordable — $7.1 million through 2018 with options that could keep him under team control through 2020. The Athletics could opt to retain Doolittle due to his team friendly contract, or they could leverage that contract to acquire prospects.

Several Athletics will become a free agent after next season. As with Doolittle, there will be no sense of urgency to move any of them. However, it’s conceivable that executive vice president Billy Beane and general manager David Forst might be willing to deal some of them to manage payroll and maximize their value.

The switch-hitting Lowrie is having a good year and owns a career .330 on-base percentage. The 32-year-old could help a club looking to improve their second base situation or improve infield depth — he’s experienced at third base and shortstop.

A factor in trade negotiations would be could be Lowrie’s salary. He’s due to make $6.5 million next year with a club option for $6 million or a $1 million buyout for 2018. That price tag could scare off potential buyers on a tight budget.

Despite his DL time, Valencia is having a great year at the plate and is hitting well above his career .273/.315/.438 triple-slash. Even if he regresses to career norms, the 31-year-old would still be an attractive option for contenders trying to shore up their hot corner situation.

On the other side of the infield, first baseman Yonder Alonso is another player who might appeal to some clubs in need of first base help. The left-handed hitter is a good defender, who he’s scuffled at the plate early in the season. However, the 29-year-old’s bat has been torrid in June. Alonso is making $2.5 million this season and has one more year of arbitration eligibility remaining.

Whether the club would be willing to move Alonso or Valencia is unknown. If they were to move one of these players, the Athletics would have to believe that number-16 prospect Ryon Healy is ready to be a regular major leaguer.

Healy is slashing .342/.401/.615 for the season in 289 plate appearance with Class-AA Midland and Class-AAA Nashville. Although the 24-year-old profiles better at first base, he’s played both corner positions this year. From a handedness perspective, the right-handed hitting Healy makes better sense replacing Valencia — who is also right-handed.

A free agent signed while injured and nearing his debut is starting pitcher Henderson Alvarez. The 26-year-old is rehabbing from shoulder surgery he had while with the Miami Marlins. He’s currently making minor league rehabs starts and is expected to join the big league club soon, assuming he doesn’t suffer any setbacks.

On the other hand, Oakland could flip Alvarez as a trade chip now. But, that doesn’t seem probable. Even if the right-hander were to miraculously return to his pre-injury form, the Athletics would be selling low if they dealt him by next month.

Catcher Stephen Vogt could also garner considerable interest as the deadline approaches. The left-handed hitter could fit nicely into a platoon situation — he has a career .269/.327/.438 triple-slash against right-handed pitching. Moreover, he has experience at first base.

On the flip side, Vogt has three years of arbitration eligibility remaining. Plus, he and Phegley are combining to make an effective catching platoon. In fact, Oakland brags the fourth highest wins above replacement from the backstop position.

Could the Athletics deal Vogt or Phegley? Sure. But, they won’t be forced to make a deal out of a sense of desperation. Rather, they could take advantage of someone else’s anxiety, if they choose.

It’s possible that Oakland’s front office could make a blockbuster trade by moving Gray. However, Beane has avoided doing so in the past. Since his ace had injury issues this season, moving Gray now would be selling low and that doesn’t sounds likely. On the other hand, with the starting pitching market so shallow, a potential suitor might be willing to take a risk on Gray.

Obviously, Beane and his front office aren’t going to deal all of the players that I’ve mentioned. But, moving some of them would help the Athletics take advantage of the market to further their future beyond this season.