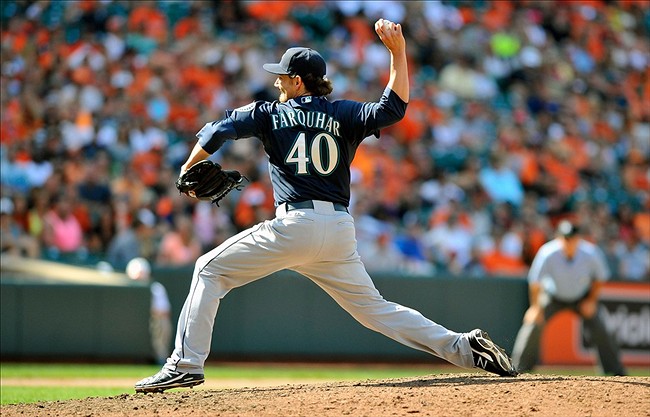 Last June, I wrote a piece reflecting on several non-waiver deadline deals made in July 2011. My rationale for looking back so far was simple. Most of these trades involve prospects who are years away from reaching the majors — assuming they ever do.

Since I enjoyed picking away at those old trades last year, I thought I’d do it again and put several 2012 deadline deals under the microscope this time. There weren’t many sexy moves that year, but I chose a few that I found interesting. I hope that you will too.

Ryan Dempster for Kyle Hendricks and Christian Villanueva
When the Texas Rangers dealt for Dempster, they were leading the American League (AL) West division and trying to earn a third consecutive World Series appearance. It’s hard to criticize the Rangers for making the deal. After losing two consecutive Fall Classics, they were willing to part with prospects to get over the hump.

Dempster pitched adequately during his 12 starts with Texas and became a free agent after the season. Unfortunately for the club though, the resurgent Oakland Athletics won the division and the Rangers lost the Wild Card game to the Baltimore Orioles.

The Chicago Cubs were at the other end of the spectrum. They were in the midst of a 101-loss season, which happened to be the first with Theo Epstein as president of baseball operations and Jed Hoyer as general manager. For them, trading soon-to-be free agent Dempster to get much needed prospects made complete sense.

At the time of the deal, Villanueva — a third baseman — was considered the centerpiece of the deal for the Cubs, but he has yet to reach the majors.

Although the 24-year-old ranks number-26 in Chicago’s stacked minor league system, he’s behind National League (NL) Rookie of the Year Kris Bryant on the depth chart. More importantly though, Villanueva suffered a fractured fibula in Spring Training and hasn’t played this season.

Hendricks has experienced better luck and landed in Chicago’s rotation as a full-time starter last season. This year, he’s off to a great start and currently ranks number-13 among NL starters, based on FanGraphs version of wins above replacement (fWAR).

In 2012, new general manager Jeff Lunhow continued the trend started by his predecessor — Ed Wade — by shipping Happ and two veterans north of the border in an attempt to restock his decimated minor league system. Although ten players were involved in this deal, only a few panned out or provided value to either club.

Lyon, Cordero, and Francisco were gone — via trade or release — within three months. After the 2014 season, Perez was traded to the Los Angeles Angels for catcher Hank Conger, who was subsequently purchased by the Tampa Bay Rays last December.

Carpenter, along with manager John Farrell were sent to the Boston Red Sox in exchange for Mike Aviles. Just four days later, Aviles and catcher Yan Gomes were sent packing to the Cleveland Indians for Esmil Rogers, who has since moved on from Toronto.

Rollins was a Rule 5 selection by the Seattle Mariners in December 2015 and currently plays with their Class-AAA affiliate. Wojciechowski was waived last month and subsequently picked up by the Miami Marlins. That leaves Happ, Comer, and Musgrove to discuss.

For Toronto, Happ was the centerpiece of the deal. The southpaw endured a tough run of injury problems with the Blue Jays, although he did provide value when healthy. In December 2014, the Jays swapped the veteran hurler Happ for outfielder Michael Saunders of the Mariners.

Happ must have enjoyed his stay in Canada because he returned to the team as a free agent last offseason after a brief stay in Pittsburgh last summer. Now, the Jays have both Happ and Saunders contributing to the big league club.

For the Astros, Comer hasn’t reached Class-AA yet and isn’t a top-30 prospect. However, Musgrove looks like he’ll eventually pay dividends for Houston. The 23-year-old is currently pitching at Class-AAA Fresno and projects to be a mid-rotation starter.

At the time of the trade, Dipoto was running the Los Angeles Angels. His ball club was just three games behind the first place Rangers and held the lead in the AL wildcard race. Unfortunately, for the Angels and Dipoto, the team didn’t make it to the postseason despite winning 89 games.

The Angels’ dance partner — the Milwaukee Brewers — were hopelessly out of contention and looking to acquire value for Greinke, who was set to become a free agent at the end of the season.

Of the three players the Brewers acquired, Segura was the best. In his first full season with the club, he made the 2013 NL All-Star team and posted an excellent .294/.329/.423 triple-slash. The following two seasons, though, he was an offensive disappointment and subsequently shipped off to the Arizona Diamondbacks in January.

Hellweg is now in the San Diego Padres organization after signing as a minor league free agent prior to this season, while Pena is still in the Brewers minor league system. Neither is on their respective club’s 40-man roster.

Although Segura provided mixed results while with Milwaukee, the club did garner some value when they traded him along with pitcher Tyler Wagner to Arizona for minor leaguer Isan Diaz, pitcher Chase Anderson, and veteran infielder Aaron Hill. This was, in essence, the second layer of the Greinke deal.

The 34-year-old Hill will be a free agent at the end of the season and is a likely deadline deal chip for general manager David Stearns. But, Anderson and Diaz have long-term value to Stearns’ organization.

Anderson is under team control for five more seasons and currently a member of their rotation, while Diaz — a 2014 second-round draft pick — currently ranks number-11 in Milwaukee’s minor league system.

Hunter Pence for  Seth Rosin, Nate Schierholtz and Tommy Joseph
Just a year after picking up Pence from the Astros, Philadelphia flipped him to the San Francisco Giants for three youngsters. He’d eventually sign an extension with San Francisco and is under contract through the 2018 season. Along the way, the 33-year-old helped his team win the 2012 and 2014 Fall Classic.

Rosin is no longer with the Phillies after his selection during the Rule 5 draft by the New York Mets in December 2013. He’s currently with Class-AAA El Paso in the San Diego Padres organization, but not on their 40-man roster. Schierholtz became a free agent after the season and hasn’t pitched in the majors since 2014.

From the Phillies’ perspective, Joseph was the key component of the deal. At the time, the right-handed hitter appeared to Philadelphia’s catcher of the future. Unfortunately, concussions derailed his career behind the plate. As a result, the team moved him to first base on a full-time basis. Now, the 24-year-old appears to be the heir apparent to veteran first baseman Ryan Howard.

Randy Choate and Hanley Ramirez for Nathan Eovaldi and Scott McGough
The Los Angeles Dodgers were hot on the heels of the Giants and their new ownership group wanted to make a splash by reaching the postseason for the first time in three seasons. So, they acquired Choate and Ramirez from the Miami Marlins. Unfortunately, for the club, San Francisco won it all and the Dodgers missed the playoffs altogether.

Although Choate left as a free agent after season, Ramirez proved to be an important contributor who helped the Dodgers reach the next two postseasons before he signed with the Red Sox as a free agent in November 2014.

As compensation for losing Ramirez, Los Angeles received a compensatory draft pick — number-35 overall — and selected Kyle Funkhouser from the University of Louisville. Unfortunately, for the Dodgers, Funkhouser didn’t sign and opted to return to school for his senior year.

For the Marlins, they recouped some value in the deal, although it was in a circuitous manner — like the Greinke deal.

McGough was waived in April, but Miami was able to flip Eovaldi with Domingo German and Garrett Jones to nab David Phelps and Martin Prado from the New York Yankees in December 2014. Phelps is the team’s eight-inning setup man and Prado is their starting third baseman.

Omar Infante and Anibal Sanchez for Rob Brantly, Brian Flynn and Jacob Turner
In another “sell-mode” maneuver, Miami sent Infante and Sanchez to the win-now Detroit Tigers. This deal turned out to be lopsided in favor of Detroit.

Flynn was traded to the Kansas City Royals in November 2014 for Aaron Crow, who was granted free agency a year later. Brantly was eventually waived by the Marlins and the Chicago White Sox. He’s currently one of Dipoto’s layers of roster depth at Class-AAA Tacoma.

Conversely, Detroit did much better. Infante played well for the Tigers until he became a free agent after the 2013 season, while Sanchez finished fourth in AL Cy Young Award voting during his first full season and he’s still toeing the mound in the Motor City.

Ichiro Suzuki for Danny Farquhar and D.J. Mitchell
This deal was a small one, but it did involve a future Hall of Famer and the Mariners. So, I thought I’d mention it.

Ichiro asked to be traded from the Emerald City and the organization obliged by sending him to New York. The former AL Most Valuable Player and Rookie of the Year helped the Yankees reach the postseason and played two more seasons with the club before moving on to the Marlins — his current team.

The 42-year-old is on-track to reach 3,000 hits this season and is certain to be a Mariners Hall of Fame member. Perhaps, his Cooperstown plaque will have him wearing a Seattle cap.

Seattle received fair value in return for Ichiro considering that he was 38-years-old and regressing. Although Mitchell was out of the Mariners system less than a year later and currently playing independent league ball, Farquhar helped the club for several seasons.

The right-hander was an asset out of the bullpen and even served as Seattle’s closer in the second half of 2013. During last offseason, Farquhar was part of a six-player deal with the Tampa Bay Rays that brought starting pitcher Nate Karns and outfield prospect Boog Powell to the Mariners.

Finally
Once again, my takeaway is that time is the best judge of deadline deals, not the instant gratification analysis certain to immediately follow after this year’s trades.

My advice to those following a team that deals for prospects next month is be patient and wait about four years before you make your final judgement. That’s easier said than done, but you’ll have a better idea on how your team actually fared. It might prevent your blood pressure from soaring in July too.